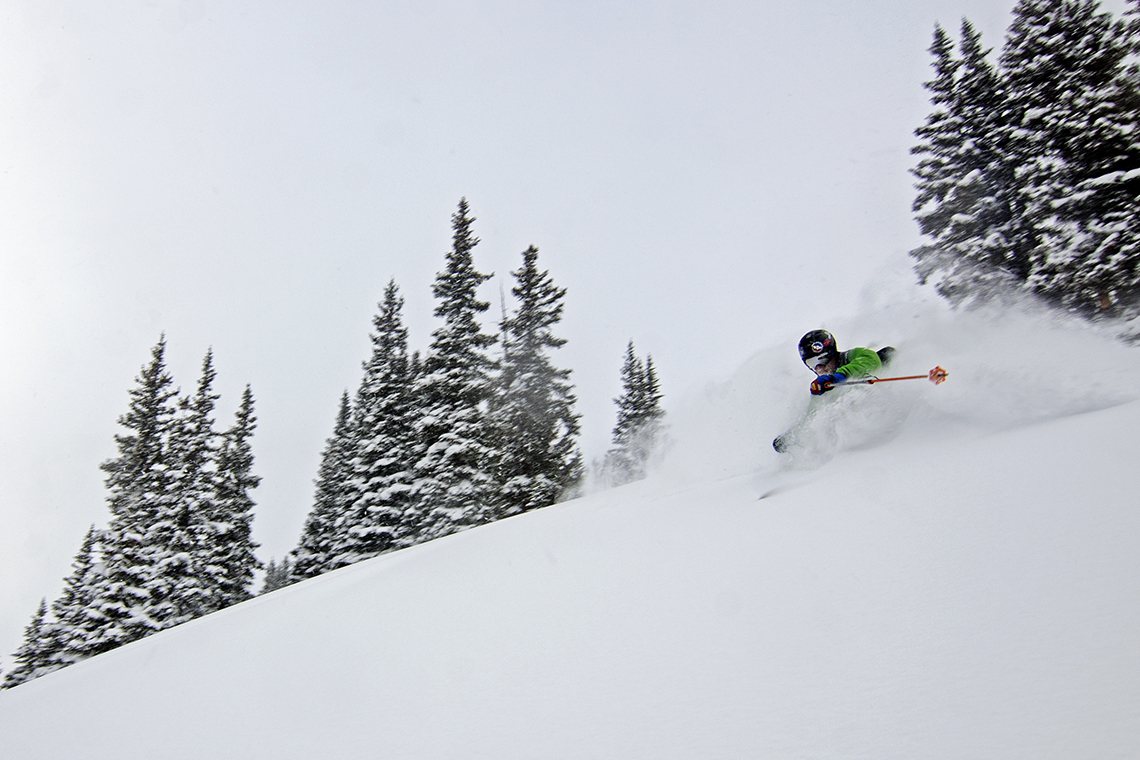 I met Fritz Sperry in 2013, at Bent Gate Mountaineering in Golden, Colorado. He and I were both attending the ski shop’s season kick off party—Fritz was promoting his new guidebook, Making Turns in the Tenmile Mosquito Range, while I was handing out copies of the Volume 16 Buyer’s Guide on behalf of FREESKIER. We got to talking and exchanged copies of his book and the Buyer’s Guide. 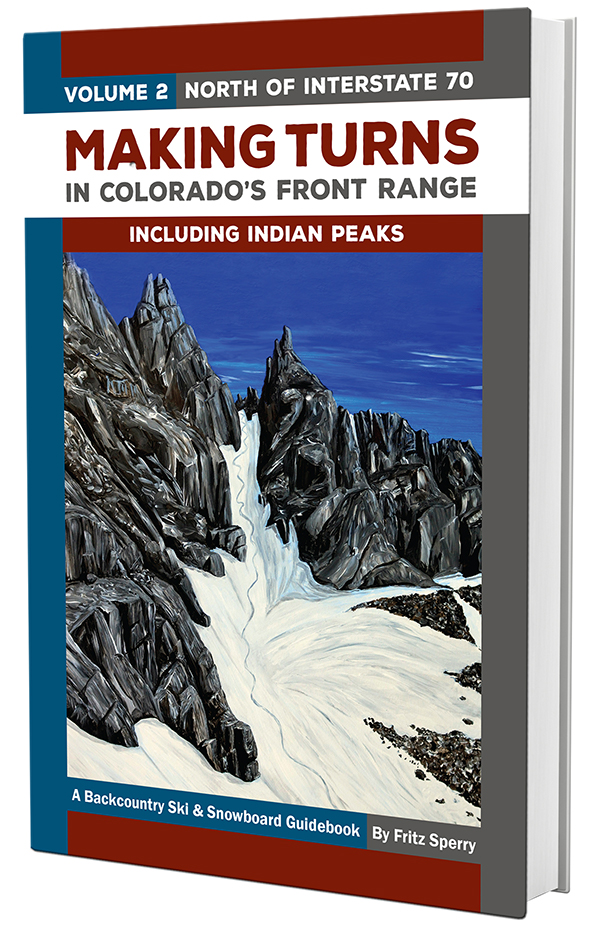 I consumed Fritz’s book like a rabid dog over the next few weeks, inspired by the countless incredible ski lines that could be skied right in my own backyard. Since then, I’ve gotten my hands on copies of his most recent books, Making Turns in Colorado’s Front Range Volume 1: South of Interstate 70 and Making Turns in Colorado’s Front Range Volume 2: North of Interstate 70 and have studied them with similar vigor. Sperry, a New York City-native, moved to Breckenridge, Colorado in 1992 and has been documenting his backcountry skiing experiences ever since. We caught up with Sperry, who’s hard at work on a statewide Colorado guidebook, for some insight on his influences, writing goals and outlook on backcountry skiing.

Hey Fritz, thanks for taking the time. Where did you grow up skiing?

Bellayre Mountain was the first place that we skied in New York, I grew up in the city so it was about an hour-and-a-half away to the Catskill’s ski areas, Bellayre Mountain, Plattekill Mountain, Windham Mountain, Hunter Mountain—Gore Mountain was always really crowded so we’d go to the other places in that area. Then, I went up to White Mountain School in New Hampshire. I got into a bit of trouble in the city, writing graffiti and being a turd, so my parents sent me away and I went up to White Mountain School for a couple of years and skied there. 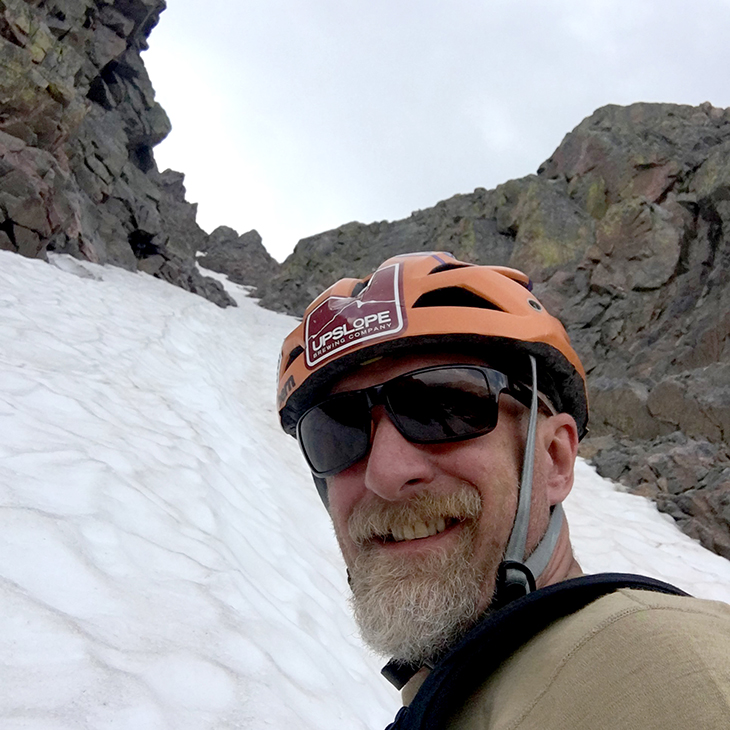 Then I moved out to Colorado in 1993, and pretty much settled in Summit County, in Breckenridge; then I spent a year in Fairplay and then moved to Crested Butte. I ended up breaking myself really good during a ski competition. So, then I moved to St. Louis for a girl, but then moved back [to Colorado] as soon as her nursing residency was done and settled back in Denver for about ten years. Now, I’m back up in Summit county, it kind of came full circle.

It sure looks that way. When did you first begin venturing into the backcountry?

You know that actually started in New York in the Catskills. There are some trails at Hunter that aren’t actually ski trails but you enter them from the ski area, and then they bring you back around to the [base]. That was my first taste of the backcountry, I must have been 10 or 11. Then, up in New Hampshire I got a taste of what would move me out here and that was Tuckerman’s Ravine and the New Hampshire backcountry.

What I found was that “wild snow,” it’s just so much better, you know? There’s less people, less tracks, there’s solitude. Solitude is hard to find. Well, it’s easy to find if you leave the beaten track.

I think that’s what many backcountry skiers covet about being away from the ski areas. How did you get into writing guidebooks, then?

That actually came from being away from Colorado. When I moved to St Louis, I was missing it really bad. The last day before I moved, I think it was July 4, I went up and skied that north line on Square Top Mountain [near Guanella Pass]. I didn’t see a soul, went solo summer skiing and that was my way to say goodbye. Then I moved to St. Louis and got really into the restaurant business and my ex-wife was doing her residency there and we didn’t know where we were going to go after that. I figured if I started writing a guidebook it would be a really good excuse to get back to Colorado, so I started the book there. 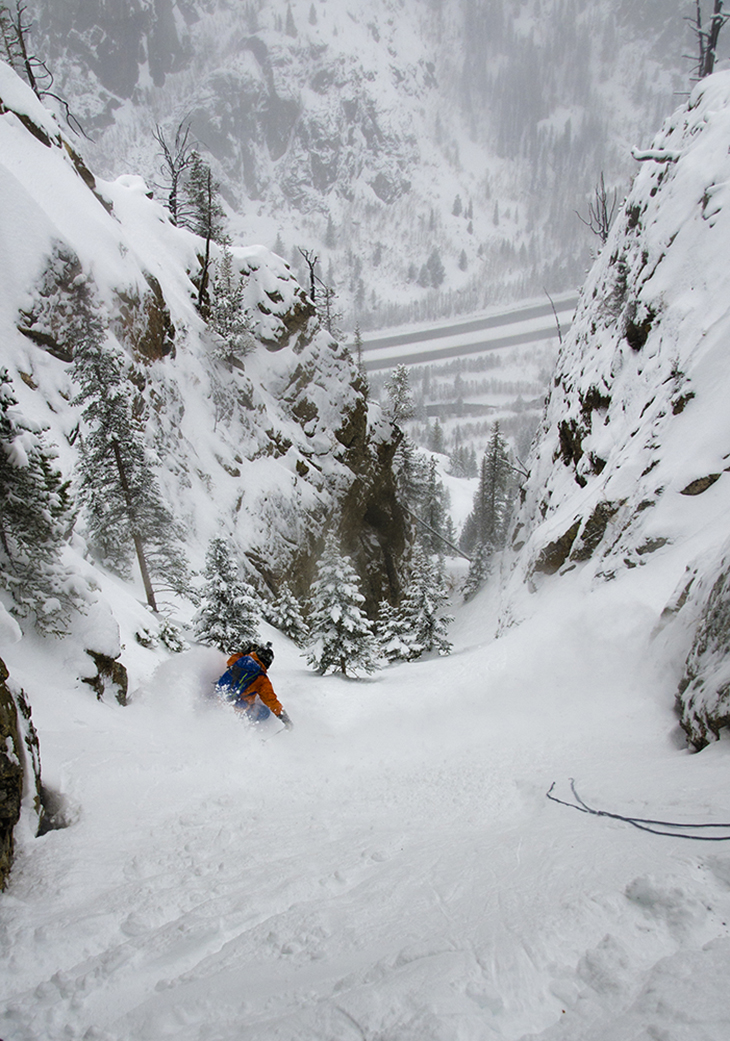 You must really enjoy the process to continuing writing them. Having skied those routes prior to your return to Colorado, did you have to go back and ski many lines to refresh your memory before writing about them?

Yeah, I get to write about what I know about. Having lived in Breckenridge and Fairplay, I skied half of the routes [in Making Turns in the Tenmile Mosquito Range], maybe more, while I lived up there but then I had to go back and ski them again because a lot of times I didn’t carry a camera—I was a poor ski bum back in the day where you actually had to develop your pictures and that was expensive. So it didn’t always happen.

Is your intent to cover the entire state with these guidebooks?

Yeah. I’m currently working on a couple of statewide volumes, that’s my project for this spring is to get the first one done. You know, it’ll depend on what happens with this spring snowpack. But it might be a north version and a south version, just considering snowpack and how tough things are this year down in southern Colorado. 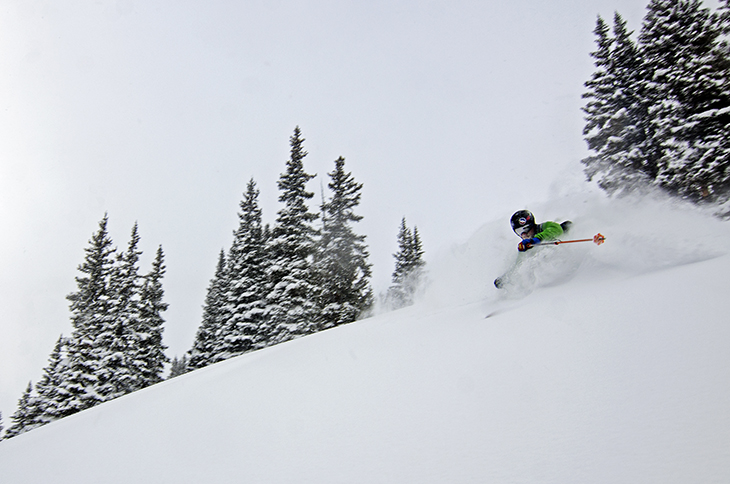 I’m changing the model just a little bit and switching to more of an overview, I’m going to try and incorporate a Front Range Volume 3 in this statewide book, cover some of the Never Summer Mountains, up through the Medicine Bows.

What do you hope to accomplish with each book?

I had originally focused on doing ranges, but the whole purpose of the books is to inspire people. There’s so much great terrain out there if you get beyond the usual suspects that everybody skis all of the time, like Torreys Peak and Quandary Peak, the short access stuff. Usually, when you get to the top of the mountain [you’re going to ski], you see 10 other lines to ski. Hopefully, half of those are in my book; but, the other half you’ve gotta figure out on your own and that makes you a better backcountry traveler—it allows people to work on their skills.

My first book turned into somewhat of a hit list, but that wasn’t really the point. I skied those lines over twenty years, so turning it into a race wasn’t really the goal. I can’t tell you how many times you go into a zone to find a line and you don’t know how to get there and you get lost and waste a day. I wanted to provide a guidebook that includes how to get to the actual trailhead, GPS points and all of that, even pictures of the actual trailhead. Then, people actually know that there are lines up there. People’s time is valuable, so finding places to go where you’ll actually get a return on the investment of your time and energy is important.

Are there other guidebook writers that have inspired you?

You know, actually, Gerry Roach, when I moved to Colorado, his fourteener book (Colorado’s Fourteeners) was sitting on my passenger seat in my car and it was pretty much one of the inspirations for moving out here. I think 15 of the first front pages were missing from the book, which I still have. While I was in Crested Butte, Lou Dawson came out with his fourteener book (Dawson’s Guide to Colorado’s Fourteeners). It’s funny, I met Lou later on and he’s the classic ski mountaineer, ski bum, writer, ski genius, if you will. He told me, “you did with your ski books, what I was hoping someone would do. You took it and turned it into a microscope for a specific locality.” That meant a lot to me, because that’s what I was trying to do. I was trying to take it to the next level, and [Dawson and Roach], especially, as well as Andrew McClean’s Wasatch book (The Chuting Gallery: A Guide to Steep Skiing in the Wasatch Mountains) inspired me. 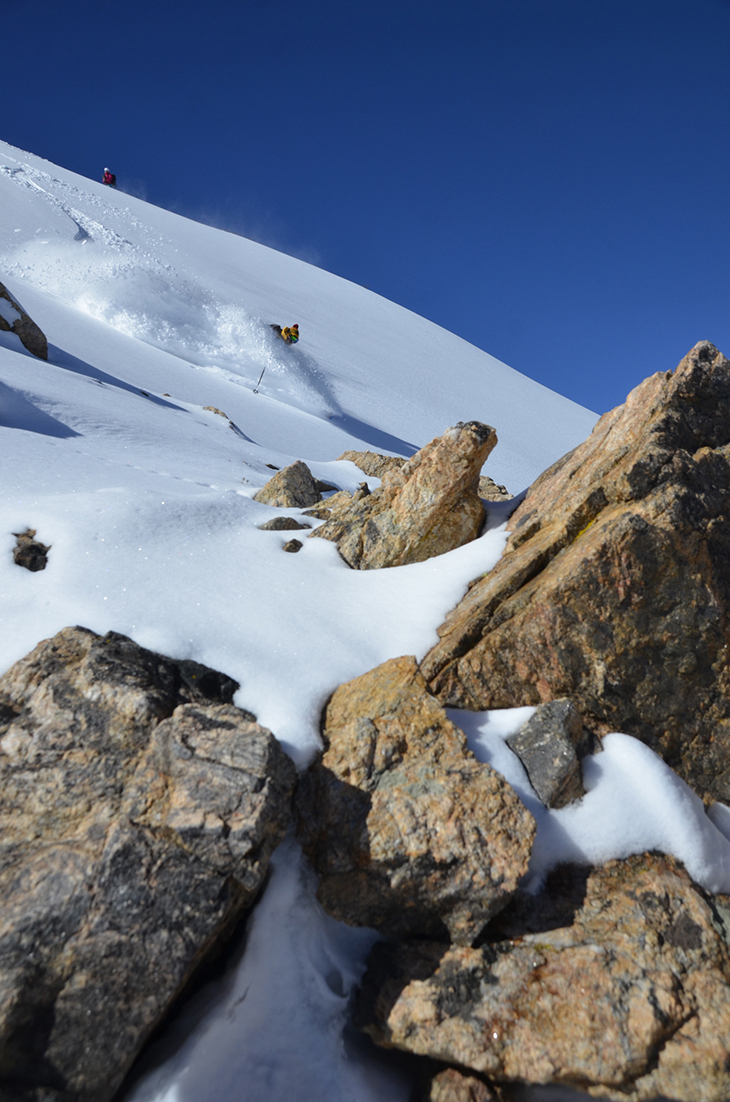 Brittany and Frank Konsella are friends of mine, I skied Brittany’s first fourteener with her, so I actually have a copy of their book (Backcountry Ski & Snowboard Routes: Colorado) and will be reviewing it here soon. Yeah, guide books are awesome, If you’re into solitude, you’ll find it in the backcountry. But, it’s also really cool to run into people in the backcountry, sometimes friendships develop out of those random chance meetings. The serendipity of that chance encounter, that’s really cool, too.

Are there any particular zones that you are unfamiliar with that you want to explore?

I’d like to break into other zones and check out other towns and scenes, like in the Steamboat area or the Aspen area. I lived in Crested Butte for five years so I’ve spent time in the West Elks. I want to go back and tick off some routes that I did back in the day and that I’ve always wanted to do, as well.

The zones that I really want to explore include the Mount Zirkel Wilderness area, near Steamboat—I’ve wanted to hit that for a long time. I’m stoked to go explore the northern Rawah Wilderness area, [specifically] Clark Peak, it looks really interesting to me and the hut access is really cool up there. So, when dealing with those longer approaches, at least you have a place to stay. And, then I’ve touched lightly on the Gore Range. There’s some people that feel that what happens in the Gore stays in the Gore, and there’s no guidebook for the range. There’s a few Gore lines that have been published in recent guidebooks. I feel like documenting a couple of routes in the Gore would be okay, the Gore is such a beautiful mountain range. But, I don’t want to turn it into a hit list type place. 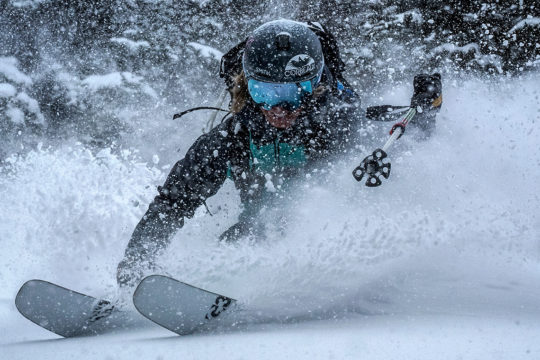 Gallery: Next year’s backcountry skis, as seen at our 2018 Ski Test