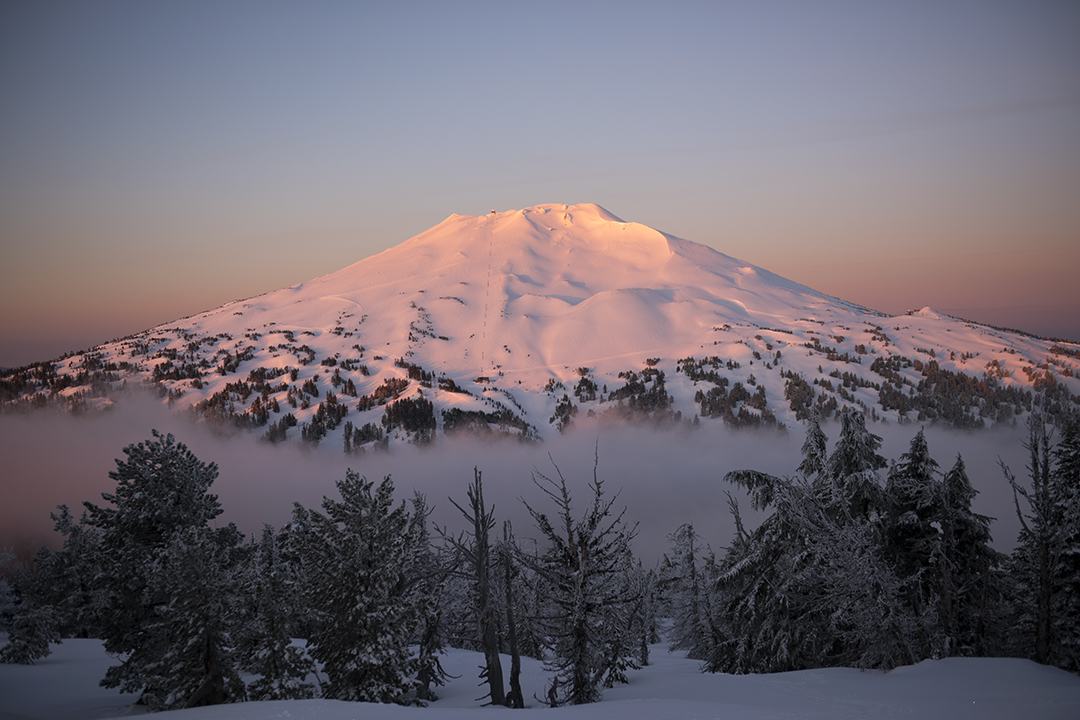 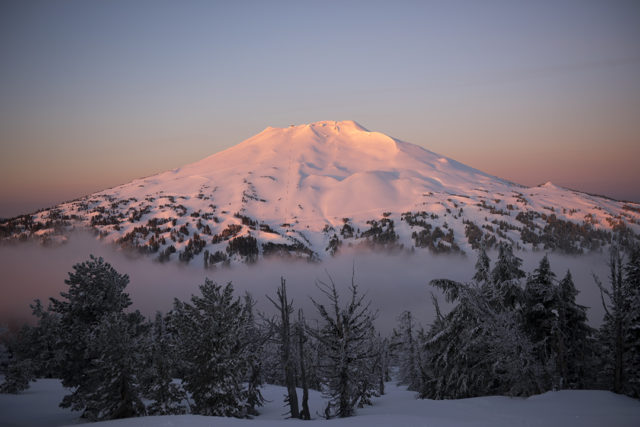 With aspirations to pursue the bigger, snowier mountains of the American west, Stirling Cobb moved from his home state of Vermont to Bend, Oregon in the fall of 2012. He considered a number of well-known mountain states that friends and fellow eastern skiers had migrated to—Colorado, Utah, Wyoming, etc. But the allure of Bend and its local ski area, Mt. Bachelor, drew him to Central Oregon.

“After digging a little and doing some research I was compelled by the fact that there were no accommodations at Bachelor, it’s just a straight ski hill,” he remembers. “And the town of Bend is approaching 90,000 people now, so it’s a small city, and that combination is kind of uncommon in the ski world. Usually it’s smaller ski towns and different scenes.”

Cobb drove upwards of 3,000 miles to a state he’d never visited before, landed a job with Mt. Bachelor for the winter, worked in a brewery during the summer, never left. He’s now the Marketing and Communications Manager for the ski area. “Five years later I’m still here,” he says. “And I’m pretty happy about it.”

Likewise, after 25-plus years of skiing the hills of Boone, North Carolina, Josh Hall was drawn into Bachelor’s tractor beam. “I moved here after 25 years in North Carolina, I wanted to get out and ski something different with real snow,” he explains. “With the amount of snow that Bachelor gets, it was just a no brainer for me, really. It’s been very hard to leave and I have no real future plans of leaving.”

Hall now serves the role of Bachelor’s Terrain Park Supervisor. Cobb and Hall are certainly not the only people to have trekked to, and settled in, Bend. The down-home atmosphere of Mt. Bachelor, its one-of-a-kind terrain, hefty annual snowfall totals and proximity to the bustling city of Bend are what lures people to the region and keeps them there.

Mt. Bachelor is found in the Cascade Volcanic Arc—a geological grouping of volcanoes that extend from Northern California through Oregon, Washington and the southern tip of British Columbia. Bachelor itself is a stratovolcano—conically shaped by the massive build up of hardened lava, pumice and volcanic ash—on top of a shield volcano, which is wider and lower profile in shape. This layered landscape of ancient lava flows has created incredibly playful terrain at Mt. Bachelor: halfpipe-like trails, bowls, gullies, transitions and more that form a natural winter playground.

Then there’s the harmonious relationship between the snow and wind. Mt. Bachelor gets its name because it stands alone, completely separated from the iconic, picturesque Three Sisters formation to the north. So, when storms come in from the northwest they collide headfirst into the mountain. What results is a vacillating pumptrack of undulating, wind-affected snow spread 360 degrees around Bachelor. 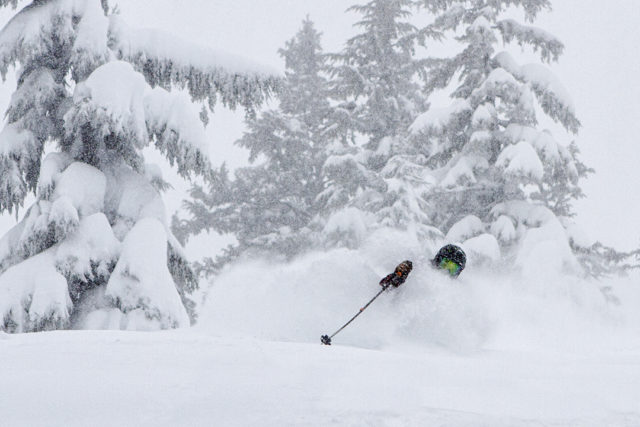 Stirling Cobb gets buried in the trees. Photo: Jon Tapper

“The entire mountain is exposed to the weather, so when we get aggressive storms, it’ll be snowing super hard and the wind will blow 40 to 50 miles per hour,” explains Cobb. “It creates wind lips, wind features and wind waves all over, everywhere on the mountain.”

As such, the mountain evolves as each storm sweeps through the area, creating newly sculpted heaps of snow almost weekly.

“They’re constantly changing. You can have your go-to wind lip hits and whatnot, but they can look one way a certain day and completely different the next,” Cobb adds. “The style of riding adjusts and progresses with that in mind and you learn how to see the mountain differently.”

This season, to give skiers a bit of shelter from the hellacious storms that batter the northwest portion of the mountain, Bachelor opened the all-new Cloudchaser lift in December 2016. The lift added 635 acres of skiable terrain to the ski area, making it the sixth largest in the United States. Its name is a reference to the way storms engulf the volcano from the northwest, allowing them to mellow out a bit by the time they reach the southeastern portion of Bachelor, where Cloudchaser is located. Even the oldest Bachelor locals have had their eyes opened to the 635 acres of slithering old growth tree runs that boast the same character as those found elsewhere on the mountain.

How Cloudchaser was built.

“On those classic storm days, the more diehard skiers will go out to Northwest Express and tough out some of the fog and wind,” Cobb explains. “But the way the weather comes in, it creates a pocket where it can be cloudy and socked in everywhere but Cloudchaser will be in the light and have great visibility.”

“Also, the way that the snow comes in with heavy winds from the west and northwest, stuff on that side of the mountain can get scoured,” Hall adds. “You can ride over to Cloudchaser and that’s where a lot of the snow has blown over and filled in.”

Mt. Bachelor’s unique terrain and weather conditions have cultivated a group of local skiers who enjoy surfing the mountain, finding transitions and utilizing the snow in creative, out-of-the-box ways. Jake Mageau, a US Freeskiing halfpipe team member who has been skiing Bachelor since he moved to Bend at age 7, owes his flowing, fluid skiing style entirely to the mountain’s shape. 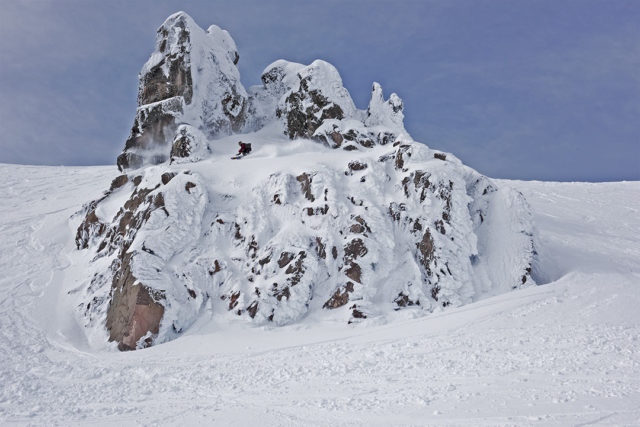 Jake Mageau slashing a turn in “The Eye of the Tiger.” Photo: Donny O’Neill

“With not as much pitch and more transitions, [Mt. Bachelor] teaches you to ride the transitions, keep your speed and use more of what you have at your disposal,” explains Mageau.

Whether it’s the steeper bowls and rock features found off the summit or the spaced out kingdom of lodgepole pines and hemlocks lower down, rolling, winding runs exist everywhere. And because Bachelor pushes people to find flowing, creative ways to explore the mountain, it breeds a mellow, low key atmosphere amongst its skiers, unlike many other western mountains where bagging the burliest lines and hucking the biggest cliffs are of utmost priority. As the ski area’s complete lack of hotels and lodging signifies, it’s all about the simple act of skiing at Mt. Bachelor. This low key ambience is also present in Bend, which lies 22 miles to the northeast.

Straddling the border of two different ecosystems—the high peaks of the Cascades to the southwest and the high desert to the southeast—the quaint, idyllic city of Bend is a hotspot for outdoor recreation, craft brewing, fantastic cuisine, the arts and more.

With over 22 breweries in town, Bend is a certified nirvana for those who enjoy downing a pint every now and then. Perhaps the most well-known is Deschutes Brewery, a family and employee-owned operation; its been a staple in town since 1988. Many of Deschutes’ offerings pay tribute to area landmarks, such as the Mirror Pond Pale Ale, Black Butte Porter and Red Chair Northwest Pale Ale (a reference to Mt. Bachelor’s storied chairlift). Deschutes’ Bend Public House is the local gathering spot for delicious après beers and mouth-watering pub plates. 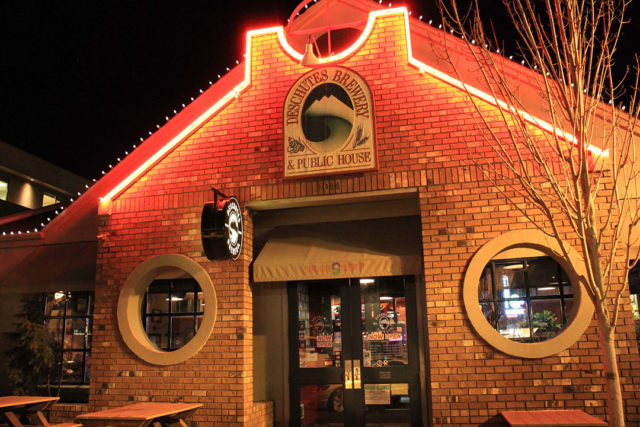 The exterior of the Deschutes Bend Public House. Photo: Courtesy of Deschutes Brewery

For those looking at add a little adventure to their bar hopping experience in Bend, the McMenamins Old St. Francis School is just the ticket. The hotel was converted from an old catholic school house into a hotel compound that comes complete with a brewery, movie theater, live music venue and a soaking pool. The highlight of the Old St. Francis School, however, is the Broom Closet. Located in the art house, following an interconnected network of hidden doors built into the walls will deposit you in an actual broom closet, where one last disguised threshold will grant you access to a cozy bar that serves up creative craft cocktails.

As far as cuisine goes, there are incredible restaurant options on practically every corner. Spork creatively combines Asian, Latin American and African cuisine to scintillate your taste buds; Brother Jon’s Public House, located in an assuming building on Galveston Avenue, offers a friendly atmosphere to grab a pub plate, catch the game and converse with friends new and old; the aforementioned Deschutes Brewery Bend Public House serves food that’s on par with the quality of its beer (be sure to try the Brewery Pretzel and its Tillamook white cheddar cheese dip or the Nashville Fried Chicken Sandwich). And those establishments are just the tip of the culinary iceberg in Bend.

Fans of fine art will find copious galleries in downtown Bend, including the Tin Pan Alley Art Collection which features incredible works from local artists on various parking garage and alley walls around downtown. In terms of musical art, the Tower Theatre sees many world class musicians float through its doors each and every year. 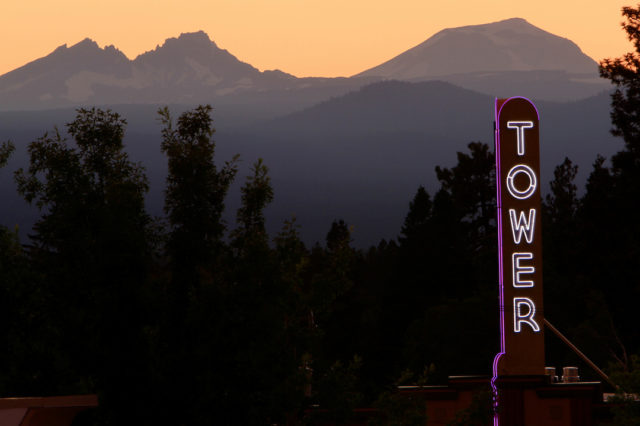 But Bend’s most appealing characteristic are the bountiful opportunities for outdoor play it holds. Mt. Bachelor is a 30-minute drive up the trafficless Cascade Lakes National Scenic Byway; there are over 277 miles of singletrack mountain bike trails in Bend and the surrounding area; Smith Rock State Park, Pilot Butte and the Oregon Desert Trail all beckon to eager hikers. And while Mt. Bachelor receives 462 inches of snow each year, Bend, on average, receives about 30, allowing guests and locals alike to link together several different outdoor activities in a single day.

“Bend is an outdoor mecca, second to none,” explains Cobb. “Bachelor skis consistently into May and even through Memorial Day Weekend, so you can ski the mountain in the morning, ride bikes in the afternoon, then go drink some of the best beer in the country in town. Everything combines to make for some of the easiest, best living that I’m familiar with.”

Once newcomers—even self-proclaimed nomads—get a taste of the delectable ingredients that makeup the meal of Bachelor and Bend, they have a hard time leaving. With the sixth largest ski area in the country, a high density of craft breweries, bars and restaurants, booming art scene and a host of additional year-round recreational activities, it doesn’t take a rocket scientist to figure out why. 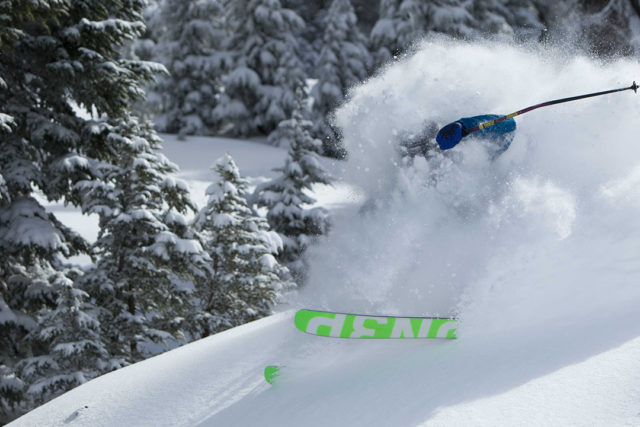 3 thoughts on “Many skiers who come to Mt. Bachelor never leave; here’s why”