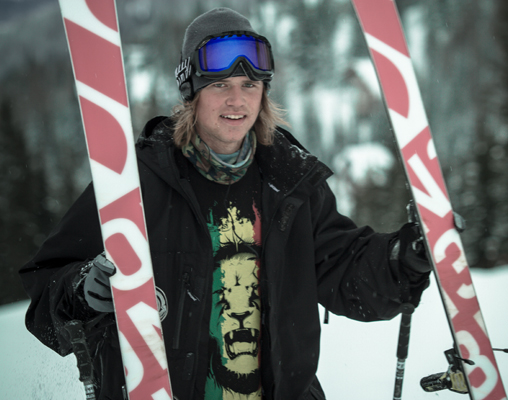 Some just call him Karl. Others call him Crazy Karl, and for good reason: Karl Fostvedt sends it. Hard. Hailing from Ketchum, Idaho and residing in Utah during the winter seasons, Karl has been shredding his way into the limelight over the past few seasons. This year, Karl shot with Poor Boyz Productions; he says shooting with a major production company helped him to elevate his game. We checked in with Karl this week to talk film and future.

Freeskier.com: Hey Karl. Where are you? What’ve you been doing?

Karl Fostvedt: I’m back home in Ketchum, Idaho, working for the summer. I’m doing a little gig at a landscaping company right now.

FS: Weren’t you at Mt. Hood not too long ago?

KF: Yeah, I got two quick trips in. One was for Session 1 at Windells, which was Poor Boyz week, and the other one was for a shoot with Poor Boyz.

FS: How much did you shoot with PBP this season? How’d you get on board with those guys?

KF: I was approached by one of the filmers who had noticed some of my online edits. I had a Facebook message pop up saying, “Do you want to shoot with Poor Boyz?” and I said, “Hell yes.”

I ended up going out to Denver during that big storm in February, and managed to get a few shots and had an awesome time. That first trip was super epic, skiing with Leigh Powis, Sean Jordan and Matt Walker. We were using that Heine winch that Poor Boyz has, which is easily one of the best, if not the best winch in the industry. It opens a lot of possibilities for urban.

I did another urban trip to McCall, Idaho and a backcountry trip to Bend, Oregon where we skied pow in the Bachelor area. Then I did some spring park shoots, too. Schweitzer and Skibowl.

FS: Did you bag any radical shots or what?

KF: Yeah, definitely. It was fun, dude. The vibe from filming with Poor Boyz helped me to step it up and try a few things that were maybe borderline out of my skill set. Just the pure stoke of filming with them helped me to say fuck it, and to try and step it up and hit some gnarlier urban features and also some big jumps at the park shoots. I wouldn’t say I’m a big jumper, so it was scary to hit some of those bigger jumps. We had a really big one up at Schweitzer and the redirect at Skibowl was insane, too. Easily the highlight of my year was the redirect. It was probably the best feeling I’ve ever had lacing some tricks on that. [Catch a glimpse of the redirect at the 01:15 mark in the trailer for We: A Collection of Individuals, posted below.]

FS: Have you been able to see any of the footage, or be a part of the editing process?

KF: Yeah, I was just out in Hermosa Beach all last week. Johnny DeCesare, Tyler Hamlet and Cody Carter invited me down so I could give some input on my segment and see the Poor Boyz office. I couldn’t have asked for a more fun way to spend a week of my summer. Editing, surfing, skating… Those guys have it made down there on the beach. It’s rowdy. Luke Van Valin was hanging around, Jossi Wells was down there… it was just overall good times hanging on the beach. Being an athlete with Poor Boyz, that’s one of the huge perks is you get to go down there.

FS: Tell me more about the editing process.

KF: It was really cool to see the whole PBP crew working hands on. They put so much time and effort into the movie, and I’m really stoked on how the movie is shaping up. I got to see a rough cut before I left. I want to give a huge shoutout to Leigh Powis for creating one of the sickest segments I’ve seen to date. What he’s doing right now, it’s just crazy. His progression… holy shit, man, everyone’s going to be talking about his segment. Hopefully he’ll be coming back strong from his blown knee and make a full recovery. If he had a whole season to film I can’t imagine what his segment could be.

FS: Do you plan to hit up some of the big film premieres?

KF: Yeah, I’ve heard the Seattle World Premiere is all time, so I’m hoping to make it out there for that one. After that, I’m hoping we might be able to get a showing in my hometown of Ketchum, and then there’s iF3. It’d be really cool to get out there to Montreal for that and to see all the films. Hopefully I can stack some money working this summer.

FS: In the past year or two you’ve really started to make a name for yourself. Do you feel any different about your skiing? Are there any new pressures?

KF: The biggest thing about it all, and the reason I’m out there is just to have fun. It’s almost meditative for me, I live for it. If I’m skiing, I’m happy, so that’s the number one thing. To any aspiring kids out there, don’t worry about making a name. Just go out and have fun. If you’re doing cool things, people seem to notice.

But overall, it’s just cool how many awesome people there are in the industry that you get to hang with between filming, comps and all that. I’m having more fun than you could ever imagine.

FS: Any plans for next season? Competing at all? Do you even like competitions?

KF: I’m going to be pretty heavy focused on filming. I hope to be shooting with PBP, 4BI9 and TSP [Toy Soldier Productions]. I shot with all three least season, and it was a bit hectic, but it was awesome.

I’m really stoked on the one hand with everything going on in the sport, what with the Olympics and all. Tons of people are pushing the envelope in that regard, but it’s also separating the genres of the sport a bit more. So I’m hoping to see some more contests opening up that are a bit more grimy. Maybe some more rail oriented stuff, like War of Rails. And if we could somehow have more events like Red Bull Cold Rush that’d be awesome—that one is always amazing. And Sammy Carlson Invitational, too. Basically more events that put a high price on fun and take things a bit less seriously. I hear rumors that the ALLI Tour might have a big rail competition, and I’d love to see skiing get some video contests like the one they have at X Games for snowboarders. So, my hope is that with the sport getting more exposure in the coming years it’ll result in more contests popping up, giving the different styles of the sport a chance to be displayed.

FS: So we’ll see you at War of Rails, again?

KF: Yeah, if Craig Coker, [War of Rails founder], keeps stepping it up like he’s been doing, that’s one event not to miss. Other than that, not trying to compete too heavy. I want to focus on filming and shooting urban, even though I love skiing pow so much. But I’m just really addicted to urban right now. I think it’s better to get all the urban done before I get too old. Where urban skiing is right now, it’s like, once you hit 24 or 25 you have no choice but to stop. Obviously some dudes are still doing it, I think of JP Auclair, but for all the massive drops and everything, I think it’s best to get it done while your body can still take those hits.

PBP presents the trailer for We: A Collection of Individuals

FS: Any plans for regular web edits this season?

KF: Yeah, definitely. I always get to the end of the season and wish I could have churned out more content. Probably a lot of Park City edits, and I want to get some urban web content up too. You don’t see enough of that ’cause most shots get saved for film segments.

FS: Will you be based out of Park City again this winter?

KF: Yeah, well, Salt Lake. I’m living with a couple friends from Ketchum. North Parker, who’s a pretty gnarly big mountain skier… he was bagging all sorts of podiums on the Junior Freeskiing World Tour and he’s also doing well on the Freeskiing World Tour. And also another good friend, a filmer and photog who goes by the name of Daniel Syms.

I’m sure I’ll be skiing Alta, doing a fair bit of skinning, and I’d like to be sledding more, but I blew my sled up and don’t think I have the funds right now to fix it, so we’ll see what happens with that. Bottom line, it’ll be super fun to be living and skiing with some friends from back home that I’ve been skiing with my whole life. Doesn’t get much better than that.