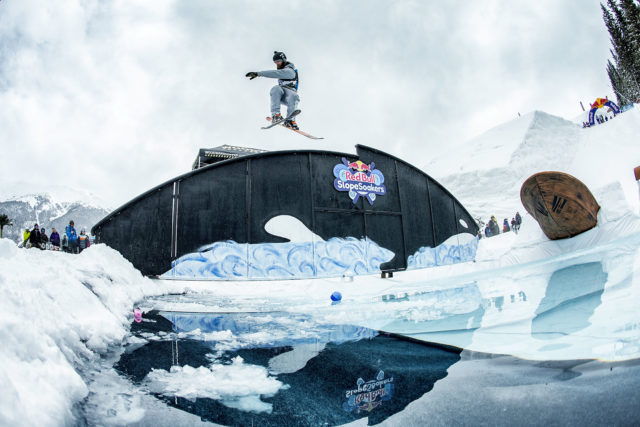 While many ski resorts put their own unique spin on the art of hosting a pond skim event, one thing is certain: pond skimming is a spring skiing tradition that every skier must attempt at least once. (And more than likely, over, and over again.) It’s a rite of passage. Whether you’re going for major style points in a pair of jorts and a tank top or for aerodynamics with a speedsuit and an aggressive racer tuck, you have plenty of pond skimming options at resorts across North America. We’ve highlighted eight of our favorites to help you take the plunge in 2017. 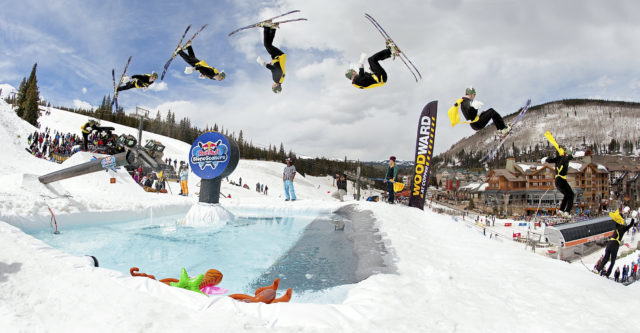 The 6th Annual Red Bull SlopeSoakers is like a pond skim on steroids… or acid, maybe? Slopesoakers is like a slopestyle event on the high seas, but has been upgraded with even gnarlier rails and jib features in a new and expanded pool for 2017. Several prizes will be handed out rewarding everything from creativity to skimming steez. Stick around after the event for a live DJ set from Mix Master Mike of the Beastie Boys.

It's been another one for the books! Till next year, Spring Back to Vail! #SBTV2016 Remember, we're still open for another week so come and enjoy the final turns of the season! 📷: @jrlockman

The 15th Annual World Pond Skimming Championships will go down at Golden Peak once again this year, during the Spring Back to Vail end-of-season celebration. The top male and female skimmers will take home the grand prize of a 2017-18 Epic Pass and a new pair of Liberty Skis. Even if you don’t plan to go for gold at one of the most-storied pond skims in Colorado, the $3 Bud Lights (noon to 1 p.m.) and $3 burgers (all day) might just be the best deal Vail’s ever seen.

Ambush Headwall’s pond is the stuff of legend and the site of Big Sky’s Pond Skim 2017 presented by Pabst Blue Ribbon. It’s only fitting that the unofficial beverage of ski towns everywhere is sponsoring this year’s event. Only the most talented skimmers will make it across both ponds or risk duplicating one of the greatest pond skim fails ever that took place at Big Sky a few years ago (watch below).

One of the gnarlier pond skim fails you will see.

The East Coast Pond Skimming Championship returns to Sugarloaf once again in 2017. Expect plenty of Right Coast rippers donning capes, tutus and the occasional Tom Brady jersey to be hydroplaning across the homemade pond located on the Landing just above the beach and base area. Prizes will be awarded by a “celebrity” panel of judges for best style, costume and overall performance.

In the United States, spring sporting traditions include March Madness and The Masters golf tournament. Well, all you need to do is venture north of the border for another longstanding athletic endeavor that takes place in May: Sunshine Village’s 89th Annual Slush Cup. As one of the biggest on-snow events in the Banff area, the Slush Cup brings competitors from around the globe to compete on Sunshine Village’s famed manmade pond. 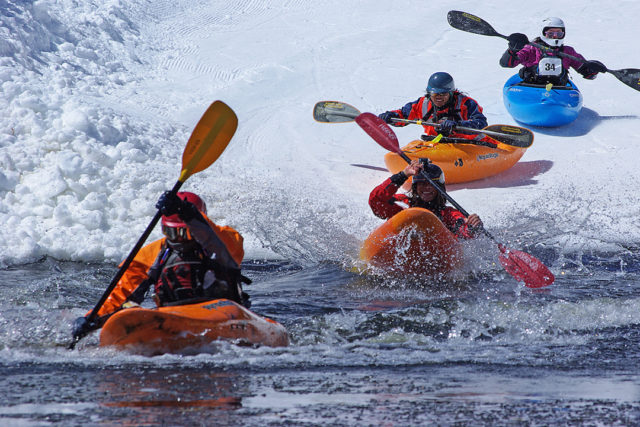 Ripping across the pond in kayaks. Photo: Courtesy of Monarch Mountain

The 11th Annual Kayaks on Snow is a fitting way to kick off the whitewater season and close out the ski season in the Gunnison National Forest. Contestants race head-to-head, a la skier cross, down a course filled with berms, banks and bumps and into an icy pond. While this event might stray from a traditional pond skim, it combines the two local passions of skiing and kayaking into one ridiculous event.

A spectator’s perspective of the 2016 Kayaks on Snow.

The Annual Cushing Crossing returns to Squaw Valley for its 27th year in 2017. Unlike most other pond skimming contests that take place on a manmade pool specifically designed for the event, Squaw’s event is actually on a pond. Adjacent to the KT Base Bar, Cushing Pond is a year-round body of water that has served as the site of the Cushing Crossing pond skim ever since longtime local Jean Hagan came up with the idea back in the day.

Highlights from the 2014 Cushing Crossing.

The Monster Energy Spring Splash goes down at Winter Park for the 49th year this spring. This pond skim is unique because contestants must battle obstacles on the Larry Sale race course before skimming across a pond and reaching the finish line. With race course gates preceding the pond, posting a good time is essential to medaling at this legendary competition.

Highlights from the 2015 Spring Splash at Winter Park. 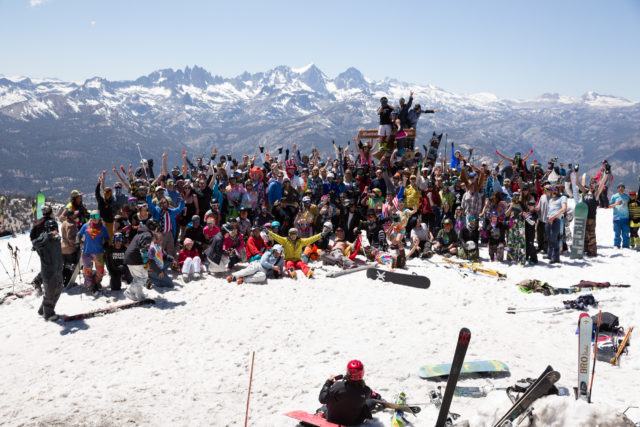