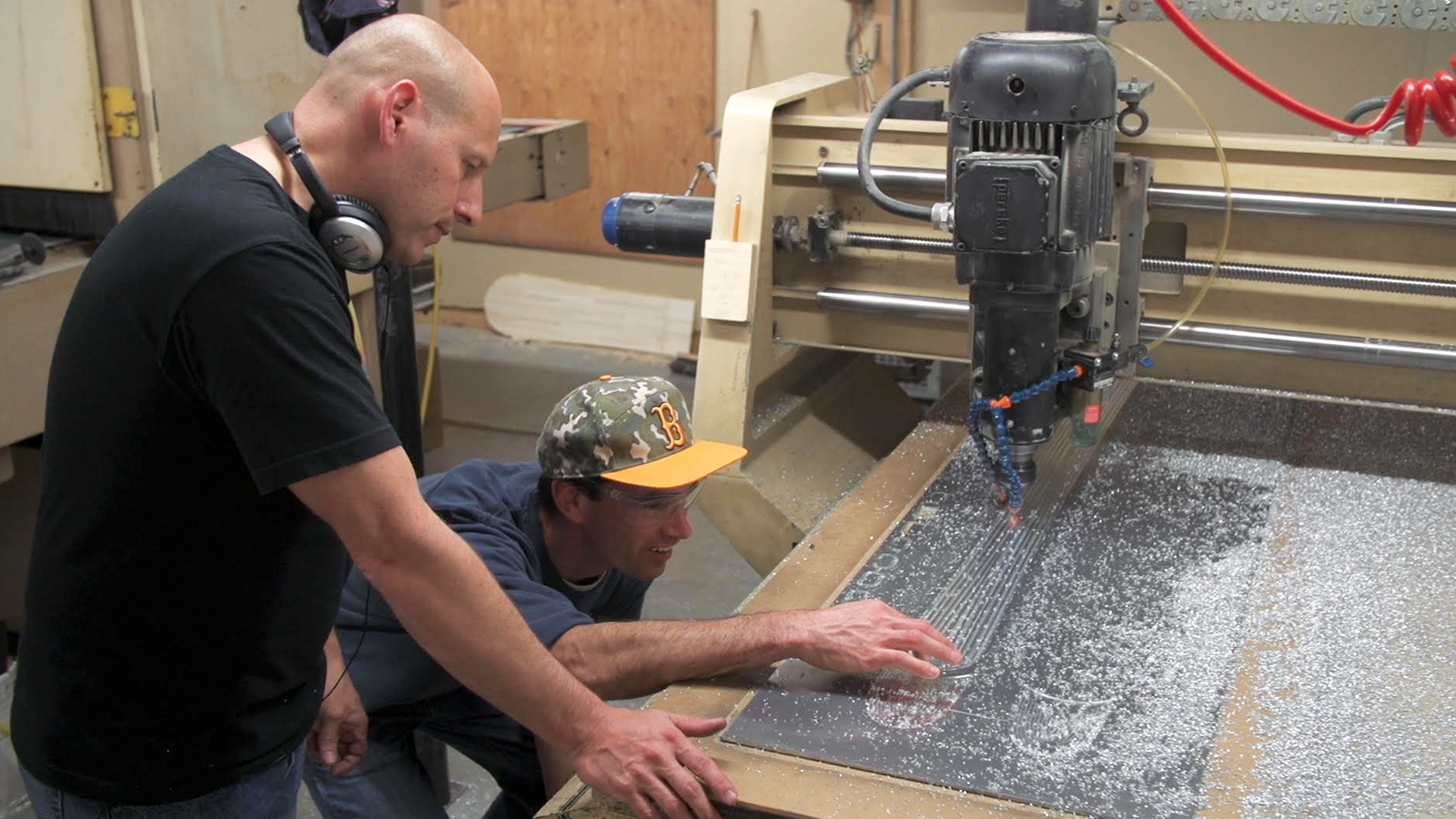 Prepping for the downhill thrill requires a slew of equipment but perhaps the most exciting purchase is a fresh pair of skis. It’s no easy feat, debating between hundreds of models that feature various materials and technologies. For this section of Gear Made Clear, we reached out to our friend and legendary ski builder, Jason “J” Levinthal who designed and built the first twin tip in 1995, founded Line Skis (later, sold Line to K2), then founded J skis, which he currently runs in Burlington, Vermont. Better than anyone, he knows that when it’s time to buy a pair of skis, the decision you’re making isn’t made carelessly. “People put more effort into buying a $600 ski than they do buying a $40,000 car,” he says. “There’s something about skiing that’s really personal—and that’s really cool. I back it 100 percent.” Here are a few things he had to say about the evolution of ski building.

You start with a wood core. Lighter weight woods like paulownia dramatically reduce weight, for less effort going uphill. If you prefer a more of a solid downhill feel with less chatter, go with a denser wood like maple, which is what I use on my J skis. But, no matter the core, it’s only is as good as the composite materials around it. The fiberglass above and below the core reinforces and provides resilience. If you add Titanal metal, you gain dampness and responsiveness, while adding carbon will enhance pop and reduce weight. The thing to remember is, all ingredients work together in unison to determine your ski’s weight, performance and overall feel. Think of it like the ingredients in a cake, there’s thousands of different combinations, and all cakes taste great, it just depends on your personal taste.

Width is the easiest area to make a mistake. Over the last decade, ski geometry has evolved so much that there’s no longer a need for owning as many skis with all different widths. At one point, riding a 120-plus-millimeter ski was the only way to float powder, while skiing on a 85-millimeter width was the only way to grip on firm snow. Today, if you want to float better on powder, we simply adjust the rocker and tip taper geometry instead of just dramatically changing the width. We’ll get more into what this means later. Basically, now you can get a ski that’s around 105-millimeters wide that floats powder and rolls over on firm snow—and boom!—you’re ripping everything really well. So, a lot has changed; you can’t just look at the ski width to know exactly how it’s going to ride.

You never ski all day riding a wheelie, so why do you flex a ski in a vertical position in the shop? Instead I lay the ski down on the floor and lift only the tip, holding it under the flat portion of the ski, just before the curve, about a foot off the floor. This removes the curved tip and tail from the equation, so you’re only flexing the running surface, just like when you’re skiing. Then I just put all my body weight into the center of the ski with my right hand and flex! Also pay attention to how the ski may flex differently in the tip/waist/tail which will affect what you’ll be feeling.

I’ve been blending five different sidecut radii for a very long time now. What we do is put a tighter radius in the very tip, a medium radius in front of your boot and then the biggest radius right under your boot. It continues behind your boot with a medium radius; then, again, tighter near the tail. Using CAD (computer aided design) we blend these five different sidecut radii into one continuous, smooth arc. This provides the skier with way more variety of turn shapes based on where they pressure the ski, giving you a far more intuitive feel. The average number of those five radii is what you see in the sidecut radius specs when you shop on Jskis.com.

It’s important to realize with reverse camber skis and skis with a lot of rocker in the tips, that when you lay the ski flat and a portion of the base is up off the ground, the ski can still carve great! The geometry of the sidecut works in unison with the rocker shape, so when you roll the ski over on edge, the sidecut along the rocker becomes fully engaged with the snow. To see what I’m saying, put the ski on a table and tilt it up on edge while bending it in a turning position. You’ll see more of the edge in the rocker are start to touch down on the table for more grip when carving. Lay it flat again and the rocker is in the air so you can smear and pivot on a dime in soft snow, for the best of both worlds.

The curvature of a ski’s edge is called the sidecut and, in combination with core materials, helps determine the shape and length of a turn when you put that ski on edge. Generally speaking, the smaller the sidecut radius, the quicker a turn the ski makes. Many brands now blend multiple radii through the length of the ski to expand the variety of turn sizes.

A ski’s sidecut radius determines the length of a full turn that it will produce when skied consistently on edge. Ski radii below 18 allow for short, quick turns. Larger radii promote bigger turns and radii above 22 meters are geared toward longer turns in more open terrain and a surfier feel in soft snow.

A tapered design is when the ski actually gets narrower in width, by ending the sidecut earlier in the tip and/or tail to help avoid catching or hooking the ski in deeper snow.

Imagine taking a stainless steel ruler, grabbing it at each end, and then twisting it opposite directions. The more it resists twisting, the more torsional rigidity it has; with skis, this translates to more grip and edge hold when making a turn. The easier it is to twist, the more playfulness and forgiveness a ski has. There’s no right or wrong here; it all comes down to personal preference.

TRADITIONAL: If you stand a pair of carving skis up—base to base—you’ll notice the bases bow out from one another in the center. This is what’s called “camber” and it increases the pressure through the full length of edge when in contact with the snow after being pressured by the skier through a turn. Generally, full camber skis give you the most power transmission, grip and control throughout a turn.

REVERSE: Reverse-camber, a.k.a. rocker or early rise, is the opposite of traditional camber. A reverse camber ski makes less edge contact with the snow when the ski is flat, making for easy pivoting, smearing and surfing.

HYBRID: Hybrid builds are most common these days,  utilizing a combination of rockered tips and tails with traditional camber underfoot. This shaping gives you the best of both worlds by making the ski playful, maneuverable and able to float through pow while retaining an effective edge throughout most of the ski.

The materials used to build a ski will provide a unique feel and determine how it handles terrain and conditions as you ride, so give some thought to the reviews as you read them. Each one will start with a wood core and the type of wood used will be your first clue to the flex pattern of ski. Paulownia, for example, is utilized for its light weight, but can’t absorb vibrations as well as more dense wood. In the middle of the spectrum lie woods like bamboo, aspen and poplar, which balance weight savings with dampness and response. The most powerful, stiffest skis on the market will likely lean on woods like fir, ash, maple or beech for their strong properties.

Complementing the wood will be a mix of other materials. Titanal, an aluminum alloy, and fiberglass are both commonly used to dampen vibrations while providing energy and responsiveness. Carbon fiber is leaned on heavily for its high strength-to-weight ratio, but comes with a high price tag. Finally, the milling of and strategic placement of these materials will generate a different flex and feel through different parts of the ski.

CAP: The topsheet runs down over the edge of the ski creating a “cap”. This is an economical build that is lightweight, and promotes energy transfer to the edges while being durable, due to its rounded corners.

HYBRID: To provide the best ratio of swing weight savings and dampening underfoot, generally, ABS or UHMW plastic sidewalls are used underfoot with cap in the tip and tail.

SANDWICH: The perimeter of the ski is built entirely with ABS or UHMW sidewalls, yielding the most dampening and power, with slightly more weight.