Published on September 25, 2020
by Andy Cochrane 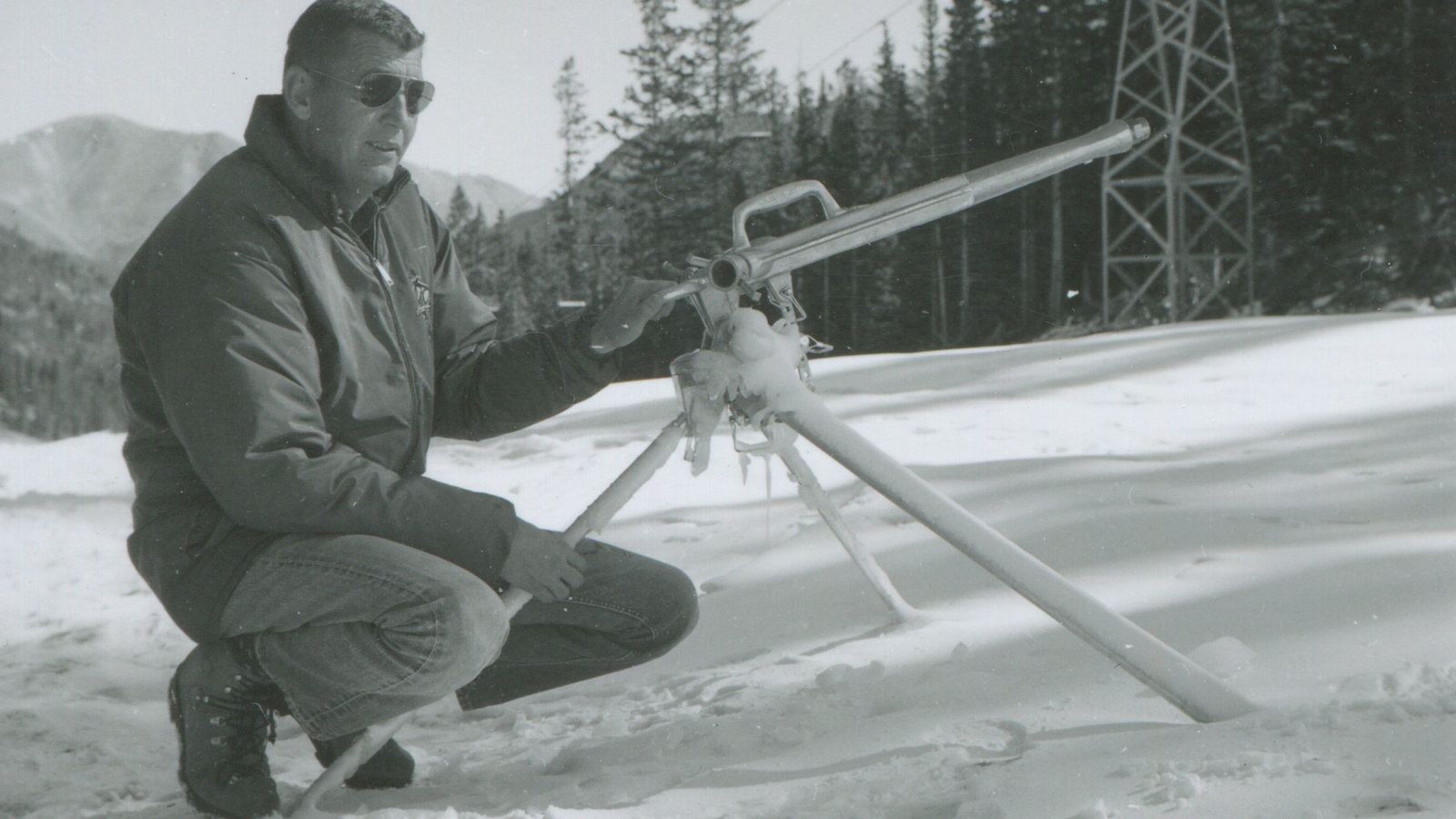 “Fifteen years ago, we had a fleet of almost 100 ‘Charlie guns,’ homemade snowguns built with whatever parts we could get,” said Dave Sontag, Maintenance Manager at Lutsen Mountains, the largest ski resort in the Midwest. “Those were the good old days. Now, we run more precise Polecats, which are great but still require some maintenance. They’re more complicated to fix when they break; Charlie guns could often be fixed with a hammer and some hard work, now we have to be more careful.”

Lutsen has one of the largest snowmaking operations in the country. At full capacity the resort can pump 8,000 gallons per minute from Lake Superior and turn it into snow for the resort. “With 10 miles of pipe, it’s a lot to keep up with. The hardest days are when a line freezes, the power goes out or one of the main pumps goes down. Those are difficult, especially in the middle of the night when temps are 20-below.”

I grew up twenty minutes from Lutsen Mountains, in a town so cold that pond hockey, curling, skiing and ice fishing were the most popular activities for six months of the year. During the winter, I worked as a snowmaker at Lutsen, once logging 33 days of work without a break while early season temps were cold and the guns were running at full blast. Skiers in the area affectionately call the hill “the best of the worst,” as it stands as the highest in the Midwest—and the snowmakers took great pride in keeping the system running day in and day out.

To create a base of snow deep enough to last from November to April without melting out, Lutsen snowmakers work around the clock from late October to the Christmas holiday. But Lutsen isn’t alone—over 90-percent of ski resorts in the United States rely on snowmaking to supplement natural snowfall. In snowier climates like Colorado and Utah, resort operators make snow to lengthen the ski season while Midwest and East Coast ski areas deploy snowguns to ensure the season happens. But, despite the widespread necessity of fake snow to cover the slopes, few skiers know much about it.

So, what is snowmaking?

Snowmaking is the process of producing artificial snow by mixing water and pressurized air, subsequently blowing it into the air at high speeds so it can freeze before it hits the ground. Man-made snow is molecularly different from the flakes that fall from the sky. In fact, the name “snowmaking” is somewhat misleading; snowguns actually make ice crystals, crystalline structures able pack tightly together that melt slower and last longer.

For many resorts, snowmaking is critical towards keeping skiing alive or, at least, enhancing the experience by ensuring a stable snowpack or making terrain park features. Notably, man-made snow was used extensively in both of the last two winter Olympics. And, how do you think those epic slopestyle courses and halfpipes are created during X Games? Snowmaking is for more than just groomers…

How did snowmaking get its start?

There is some debate on the history of snowmaking, which mostly boils down to what constitutes a real snowgun. Here is our take on the matter.

The first man-made snow dates all the way back to 1934 in, oddly enough, Hollywood, California. Warner Bros. wanted to create a blizzard for an upcoming film and, to do so, fabricated the first snowmaking machine. This low-tech precursor looked and functioned nothing like a modern snowgun, using three blades to shave ice off a 400-pound block and a large fan to blow the particles in the air. Yet, the machine worked well for close-up shots (and for making snowballs), and snowmaking was born.

A decade later, in the 1940s, a lab in Toronto accidentally found its way into the snowmaking history books while studying the effects of rime ice on jet engines. Led by Dr. Ray Ringer, researchers inadvertently created snow by spraying water near the engine intake and, instead of reproducing natural, rime ice conditions, ice particles shot out the back end of the engine. Lab workers had to repeatedly shut down the operation to shovel snow out of the wind tunnel. Go figure.

It wasn’t long until the blossoming ski industry took note. In the dry Connecticut winter of 1950, Walter Schoenknecht, the owner of Mohawk Mountain Ski Resort, trucked in 700 tons of ice, shaved it up and spread it over a ski slope. Although no other resorts immediately followed his lead, the effort sparked an idea among his employees: What’s a better way to replicate the use of manmade snow?

A few months later, ski factory employees Arthur Hunt, Dave Richey and Wayne Pierce developed a plan to make snow. They assembled the first modern snowgun with a spray-gun nozzle, a 10-horsepower compressor and a garden house. After a night of tinkering, the three makeshift inventors produced a pile of snow 20-feet in diameter. Four years later, they were granted a patent and installed a few of these snowmaking machines at Mohawk resort. Their efforts were short lived, however, and they sold the patent in 1956. But the progress wasn’t made in vein.

In 1961, Alden Hanson was granted a patent for a new type of snowmaking machine equipped with a fan. His design was quieter and less prone to freezing, and looked similar to the snowguns of today. In 1969 the design evolved again, this time by a trio of inventors from Lamont Labs at Columbia University. Using a rotating fan blade and water pulled in from the rear, the snowgun was finally a real success. This design was the first to be commercialized and mass produced, but took a few years to see growth.

One of the earliest major resorts to utilize snowguns to expand its winter season was Loveland Ski Area in Colorado. In 1967, the resort began making snow, utilizing the diesel compressors brought in for the construction of the nearby Eisenhower tunnel. Loveland made a deal to use them only at night, when road construction wasn’t taking place. Today, Loveland continues to tout its snowmaking efforts and is often one of the first ski areas in the country to open every season.

By the mid-1970s the snowmaking boom was really, finally, taking off. The snow the machines produced was still notably icy—not great for skiing—and was strictly used as a last ditch option for bad snow years. Gradually, however, the product was refined and, by the 1980s, many resorts were using snowguns to expand their winter season, not just offset poor snowfall.

Snowguns in the modern age

Today, snowguns are nearly universal. Resorts employ dozens of dedicated workers—like myself at Lutsen Mountains—to run multimillion-dollar facilities that include a large fleet of snowguns and miles of water and air pipelines. In the last four decades, the science behind the machines has improved dramatically, with automation, powerful fans, nozzle design and nucleators, which help water freeze faster. Yet, the basic principle is the same. Pressurize air, mix it with water and blow it into the air, allowing freezing temperatures to turn it into man-made snow. Science and skiing in perfect harmony.

“Snowguns are instrumental in the race to be the first to open,” said John Sellers, Marketing Director at Loveland. “Every year we have a friendly competition with our neighbors across the pass, A-Basin and Keystone, to see who can be the first to spin the chairlifts. All it takes is an 18-inch base and one run that is covered, top to bottom. This race is dictated by both weather and our ability to make snow.”

Sellers says that snowmaking typically starts in early October and will take roughly two weeks before opening the first run. Just as important, Sellers emphasizes, “is to expand the season and stay open longer into the spring. We’re fortunate to get around 400 inches of snow per year naturally, but fake snow stays longer and creates a base that will hold natural snow into May most years. This allows us to have one of the longest ski seasons in the nation.” 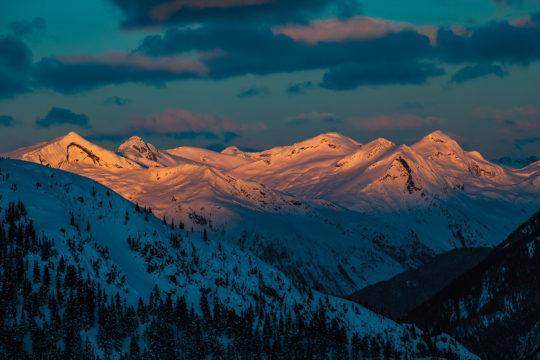