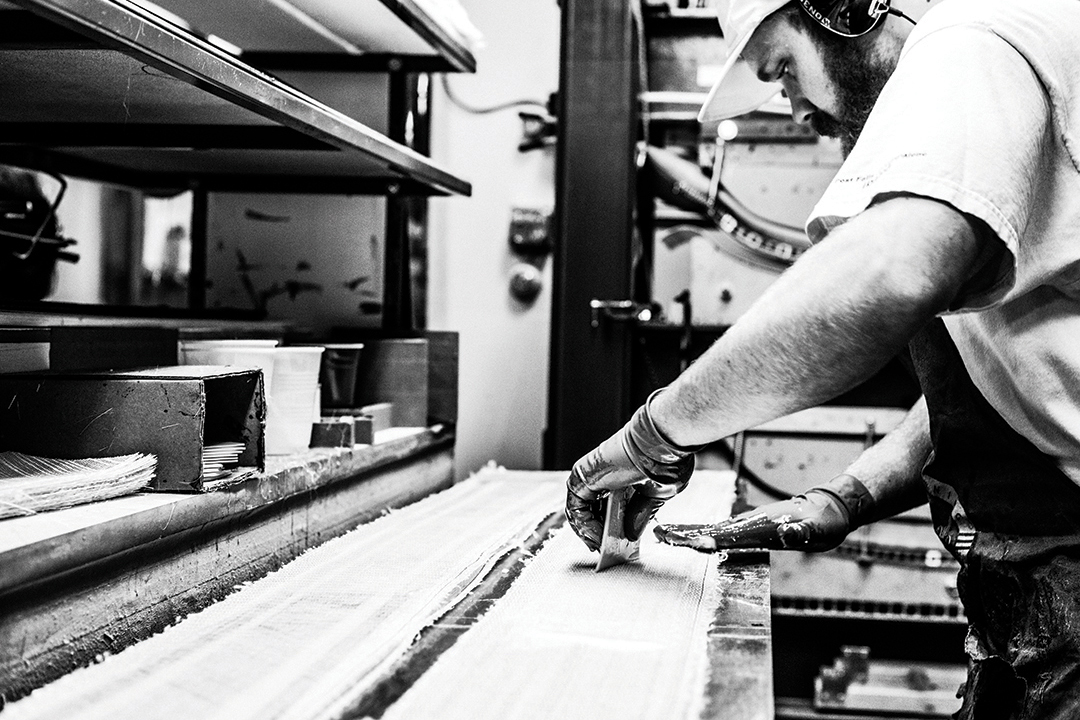 This article originally appeared in the 2014 Photo Annual issue of Freeskier, Volume 16.5. Freeskier Magazine is available via the iTunes newsstand.

In the parking lot of a small, anonymous industrial park on the east side of Portland, four cars in a row stand out from the rest. It’s clear from the decals that adorn them that the warehouse space they sit in front of is home to a business whose employees are not only dedicated to a sport but also to a brand. A brand that just a few short years ago was nothing more than an idea, born in an apartment on the corner of N. Thirteenth and Proctor streets in Tacoma, WA: ON3P Skis.

It’s Veteran’s Day, and, inside the front door, the office space is quiet, but not because everybody has the day off. Quite the opposite. Through another door, machinery hums, and the owners of those cars are in the middle of various tasks: grinding, trimming, clamping. It’s all hands on deck as the crew honors our vets not by taking a breather but by working hard. If the day goes well, they’ll churn out eight to 10 pairs of skis, some of which will go through a fitting ski press that pays homage to the stars and stripes of our nation’s flag.

Over the years, founder Scott Andrus has heard his company referred to as a number of things. “‘Onep’ and ‘Open’ are ones I hear a lot,” he says in a slightly irritated tone, though he admits it’s to be expected with a name like ON3P, which is pronounced in singular characters, O-N-3-P. Truth is, he never thought the name would really matter because he didn’t expect to be standing on the floor of his own ski factory some seven years after he coined the moniker.

During the spring of 2006, while enrolled in his sophomore year at the University of Puget Sound, Andrus began thinking about building his own skis—an ambitious project for somebody with the workload of a pre-med student. Two years later, after putting together his own ski press in his garage, Andrus pressed his first pair. He also graduated from college that spring and then spent the next two months churning out more skis, many of which had been pre-ordered by kids in the forums of newschoolers.com. His first unofficial production run yielded 53 pairs, and what had started as a hobby began to resemble a viable business.

Fast forward to 2013 and ON3P is operating out of a recently revamped, 8,400-square-foot factory. Renovation is a common theme throughout the company’s history. When Andrus moved to Portland in 2008, it took a year to secure adequate funding and find a production space.

The first Portland facility was continually upgraded to match expanding business during the following three production cycles. In November 2011, they moved into their current space, and after one production run, had to once again overhaul the factory to up their production capabilities. “It almost seems like we spend more time building things to build skis than we do building skis,” one of the ski builders says as he lays a pair out by hand.

“A lot of our ad [budget] goes toward film because that’s what we value,” says Andrus. “We don’t care about competition results because we can’t really compete against the Salomons and Armadas in that regard.”

ON3P currently operates with seven full-time employees and about 10 seasonal interns, and everyone has a hand in the ski-building process. “It’s been pretty much the same core group for a while,” Andrus says. “Some people will come in and want to work for the ‘cool ski company,’ but they don’t actually want to work. It’s like, we actually build skis, and that’s been a harsh realization once or twice—that there’s a lot of day in and day out just building skis.”

The company sells most of its skis directly to niche customers but is working hard on becoming a household name. “There are still a lot of people, even here in Portland that are just finding out about us, so there’s a lot of work on the marketing end to go,” Andrus says. Part of the problem is that a privately funded company goes through cash highs and lows that put a chokehold on finances and don’t leave a lot in the budget for advertising, particularly while the company is trying to upgrade facilities. A main focus has been to channel the little money they have into supporting athletes they feel truly represent the brand.

“A lot of our ad [budget] goes toward film because that’s what we value,” says Andrus. “We don’t care about competition results because we can’t really compete against the Salomons and Armadas in that regard.” Karl Fostvedt is a prime example of what they do value: a talented skier with a good work ethic. And for this reason, they’ve been a big supporter of his, stretching the budget to help accommodate a busy travel schedule. “The thing about Karl is that he has a set of BC skills that we’ve been trying to showcase too, but it’s hard to get him back there with a camera crew following him. That’ll be our big push this year.”

Outside of athletes, they mostly stick to a straightforward marketing approach. “I would call it no bullshit,” says Andrus. “We are who we are. Hopefully, you like the skis.” They don’t use buzzwords for the proprietary technology in the skis, which has resonated well with savvy customers who know what they want and can see through gimmicky advertising. Reverse elliptical sidecut, a concept developed in house and tested over the last few years, is called just that, reverse elliptical sidecut or RES. Andrus’s voice is proud as he explains the idea that they’ve worked hard to refine, “It’s literally completely reverse sidecut from bootcenter forward, but it rails on hardpack.”

The guys at ON3P are always tinkering with their designs, both incrementally and in bigger ways, as any good ski company should. “[Our ski line] is pretty dialed, but we’ve got a couple crazy things we’re working on,” Andrus says. Seven years into it, the creative drive hasn’t faded.

Next year’s product line will be getting a significant overhaul as they slowly transition into the retail world and attempt to shed the garage brand image. “We really like the direct sales aspect because you get to interact with your customers, and they get to talk to the people that are actually building their skis, which is unique,” Andrus says. “But there are some people that are just never going to be on the Internet looking for skis but who will be at ski shops. So I think it’s important to be on the wall in some of those shops. It makes you more legitimate.”

The company won’t just be selling to anybody who’s buying though. They’re targeting influential shops in each region to reach the right customers and requiring those shops to pick up a minimum of three models. “We want to show the whole range and make sure people know we’re not just building one model in a garage somewhere.”

Andrus knows it’s not an easy road ahead. “We run the business, but everyone is on the [factory] floor like 90 percent of the time too, so that’s been kind of the toughest thing for us,” he says. “There’s so much stuff that goes into running a business and talking to retailers and shipping.” But when asked what philosophy drives the company forward, Andrus’s answer is simple, “We just want to build skis better than everyone else. It’s all about the skis.”