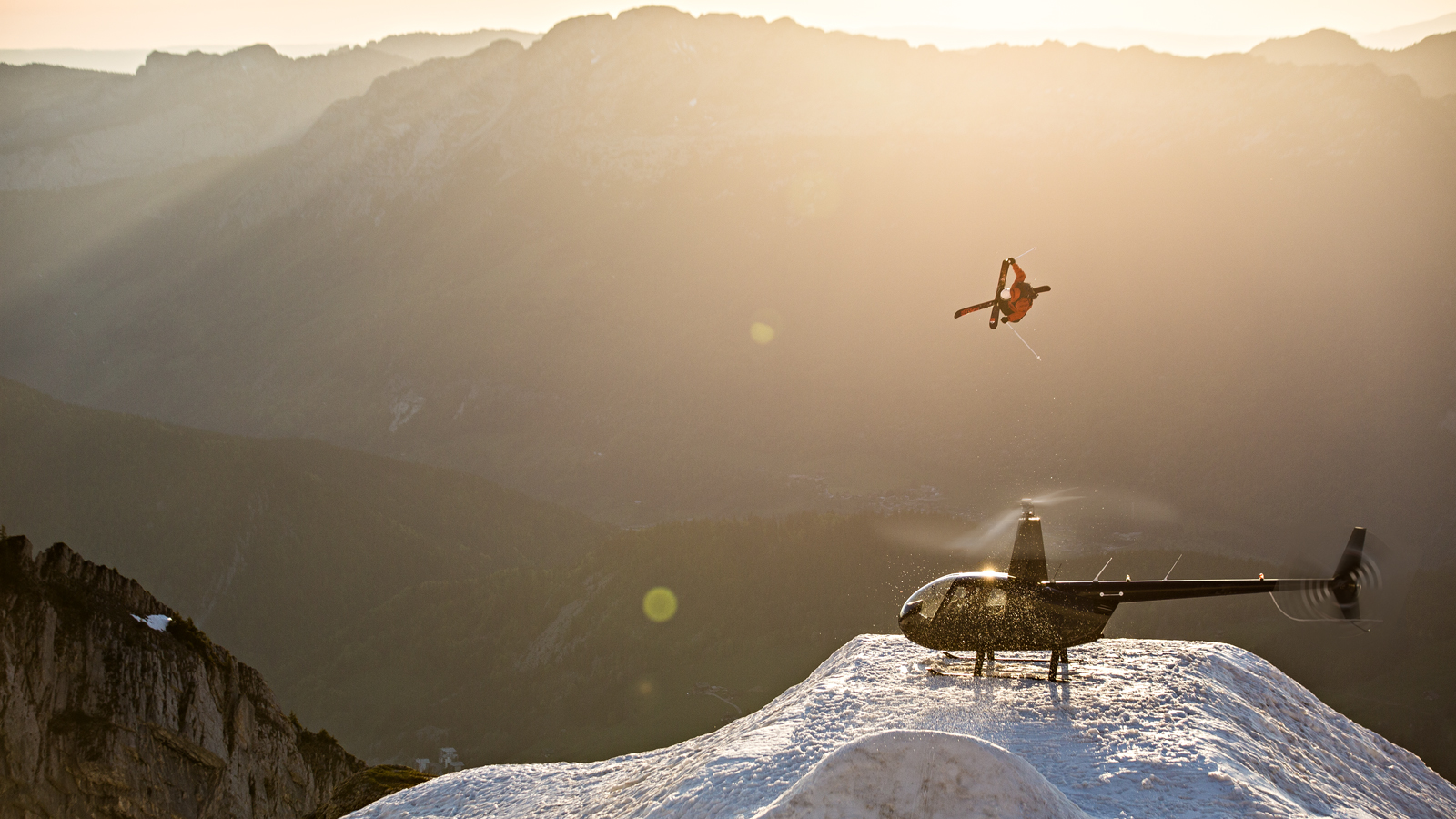 With two days until press time, I’m locked in a poorly-insulated Vermont cabin, penning missives to the last falling leaves. There is no interview. Candide has been sequestered on a remote island for his next project. Even guessing at his location here would prompt excoriation (if not legal action) from his gatekeeper and ward, someone named Jasper Sanders. Jasper has assured me via email of the one thing I already know: Candide Thovex is a very hard person to get ahold of.

Candide’s isolation is no accident. He is cut off from the world by a hand-picked cabinet of managers, fixers, movers and shakers—the kind of people who can play any role from production assistant to power broker at any given moment on any given day. It is with the help of these silent partners, the power behind the throne, that Candide Thovex has propelled himself from the relative fame of freeskiing’s elite to a household name that even your grandma may know. But with fame has come heightened security and a pervasive air of non-disclosure among those in the inner sanctum. “I swear they have a code of silence,” FREESKIER editor, Henrik Lampert, lamented after a staffer at Faction Skis ducked his interview.

“I know,” I said, “I’d have better luck getting an audience with Tom Brady.”

“I’m a Bruins fan, I don’t give a damn about football,” he said. “Just get me the article.”

But things aren’t looking good. Even my most promising lead, Candide’s longtime friend and photographer, Christoffer Sjöström, has not borne fruit. I edited the English portion of a photo-biography titled The Book of Candide for him some years ago, but my suggestion of a quid pro quo was initially shut down. “I cannot answer on behalf of Candide,” Christoffer told me in a tone that mixed regret with a bureaucrat’s sense of duty, adding, “this is why it’s hard to find information about him, because so little is told. This is the way he is.”

The way Candide is… it’s a hard thing to pin down. As skiers we know his story by heart, but we also know that the person behind the goggles is conspicuously absent from almost every page. According to those close to him, the thirty-five-year-old Savoyard has always kept to himself—an inborn shyness that became even more pronounced when he won the French Junior National Mogul Championship at the age of fourteen. Pro skier Joffrey Pollet-Villard tells me that in their hometown of La Clusaz, France, Candide is known affectionately as l’enfant du pays, or “native son.” More literally, the phrase means “son of the soil,” which in Candide’s case may be the intended nomenclature, because his legend seems to grow straight from the rocky dirt of Balme itself. As his mentor Edgar Grospiron suggests in the 2012 documentary Few Words, the boy had a singular relationship to the mountain, which was equal parts a playground and his castle in the sky: “Every morning he opened the window and he was just facing Balme. I’m sure he was looking… what cliff, what air, what rock he could jump.”

Candide is often construed as a silent savant who ‘speaks through his skiing’ or not at all, but the street-skiing sensation, Phil Casabon, recalls his surprise in first meeting the Frenchman, who he’d expected to be standoffish: “He exuded wittiness and confidence, just like his skiing. And he always kept a smirk on his face like he had pulled a dope prank.” In 2003 I was a newly-minted Level 1 Productions athlete settling into my room at Superpark when Salomon director of marketing, Bruno Bertrand, and WW Films’ Lionel Gehin burst in to tell us that “the room is reserved for Candide.” Tensions were high until Candide came walking through the door. He smiled earnestly and said “Allo” like someone answering a telephone. It was obvious that he didn’t give a damn what room he was staying in. Three years my senior, he looked like a kid with doe eyes wide-set in a gaunt face, yet there was something in his countenance that I will never forget; it was the face of a man who understands his place in the world.

By all accounts he was already the best freeskier on the planet, a distinction bookended by two X Games gold medals and the benchmark 720 at Chad’s Gap: the Y2K D-spin remains, for any red-blooded freeskiing aficionado, a moment in sports history that can only be likened to Jordan’s game-six jumper against the Jazz. Yet while Joe Public may have slept on the Frenchman and the sport of freeskiing at large, it was the towering airs and matchless style of the inaugural X Games freeski superpipe event in Aspen that put the fledgling sport and its new posterchild on the map. Even an untrained eye could see the rawness of Candide’s skiing, way out on the breathless edge between chaos and perfection. Already there was a sense of his otherness… the pomp and circumstance and the ready-made TV drama of X Games seemed to melt away every time he dropped in.

In 2007, shortly after becoming the second freeskier (after Tanner Hall) to complete the Triple Crown with a gold in all three X Games disciplines, Candide finally met his match when he fell short on a monster of his own creation, an almost 40-meter gap at the Candide Thovex Invitational. The news that he had broken his back shook the industry to its very core and the rumor mill ran rampant: “Candide can walk, but he will never ski again,” some said, while others claimed they had it on good authority that he had, in fact, been paralyzed. Regardless of what anyone knew for sure, there was a consensus view that Candide had always been the type to burn out rather than rust, and few seemed surprised that he had finally flown too close to the sun.

It’s funny how we elevate our sports heroes to the level of gods. Especially in the ever-accessible realm of ‘action sport’ where we see ourselves in the great ones, imagining, perhaps, that their experience is no different than our own. Maybe if his career had ended there on the deck of that tabletop, we could separate Candide Thovex from his own mythology, shelving his legacy like a common artifact. But after a two-year hiatus, just when his silence seemed absolute, Candide staged his comeback.

Directed by Simon Favier, Candide Kamera heralded a new era for its eponymous hero—one in which he emerged as the sole proprietor of his image. No more would we see a Candide Superpark highlight reel in every shoestring, bush-league ski flick. This was carefully curated content, a portrait of the artist in his element. As Sjöström put it after I finally squeezed some answers out of him under duress, “I believe Candide Kamera was a turning point of his career. His comeback came as a bomb. He showed the world something new, something different with his ski style and with his versatility. The pow lines, the jumps, even the music was different.” The cerebral, almost cosmic soundtrack of the two-part release, paired with the cinematic backdrop of the French Alps cast Candide in a new light: a man who was living proof of the beautiful power of nature… the power to give and the power to take away.

Candide Kamera also marked the beginning of a more accessible brand of content in its departure from the reggae-charged esoterica of earlier releases like Rastafaride. “No more reggae?” Swedish skier Henrik Harlaut asked Candide one day while we were all standing above the B&E Invitational course in Les Arcs, France. And measuring his pole next to Thovex’s added, “and the poles, so damn short!” It was an homage, albeit an underhanded one, to the way in which Candide had rebranded himself; gone like the snows of yesteryear were the oversized poles and dancehall riddims that had been the hallmark of a young idealist.

Later that same day I caught Candide alone for a second. “Do you still smoke?” I asked, indicating with a clenched pointer finger and thumb that I didn’t mean cigarettes. His eyes widened with surprise and, feeling the sudden sting of a muckraker I was relieved when he answered, “Non, Non. I grew older. I become tired of that.” The exchange remains my only window into the personal life of a man whose mystique has become couched in rhetoric that leads us always further from the man himself. Candide’s biggest secret is maybe that he doesn’t have one.

Some years ago, Clayton Vila asked Candide for the secret to his longevity, to which he replied, “stretching and a good chiropractor.” But no degree of flexibility or faith in alternative medicine can explain what happened in 2010, when Candide became World Freeride Champion in his first and only season on the FWT. It was the final punctuation point of a competitive career that spanned half a dozen disciplines and more than a decade, and he had done it with a titanium cage around his spine. There was only one frontier left to conquer: the general public. While the high production value of his recent projects had whetted his appetite for mass-communication, freeskiing still lacked a touchstone like Glen Plake or Terje Haakonsen—a ‘that guy’ whose name every Tom, Dick, and Harry could drag down to their local sewing circle or water cooler and toss around like a pigskin.

On balance, Candide seemed an unlikely candidate. I’ve spent a fair amount of time with the guy over the years and I can’t tell you what kind of beer he drinks, much less get him to answer the goddamn phone (if he even has one). But his next endeavor was a calculated one, in that it provided fodder for the masses and answered an age-old question among his biggest fans: What does the world look like through the eyes of Candide Thovex? The One of Those Days series offers a POV perspective of Candide skiing in his own backyard, Balme, the place of his becoming. The three installments have collectively been viewed almost 40 million times on YouTube, making Candide the most visible action sports icon since Tony Hawk and Shaun White.

There is a feeling, for those of us who have watched his rise, that this kind of fame was an inevitability. Here is a man who competed in the first X Games freeskiing event in 1999, still in peak form almost twenty years later. But I cannot help but feel a tinge of regret; while we may never have learned whatever it is that Candide has been hiding all these years, it is the very idea of Candide Thovex, that inscrutable, high-minded ideal that has always belonged to freeskiers and freeskiers alone. And yet I take comfort in the fact that Candide is still out there, still unfettered by time and age and the evils that drag us down and tarnish our greatness. Candide abides, now and forever, riding the electric wave of a thing that we will never know.

This story originally appeared in the January 2017 issue of FREESKIER (20.4), The Anniversary Issue. Click here to subscribe and receive copies of FREESKIER Magazine delivered right to your doorstep. 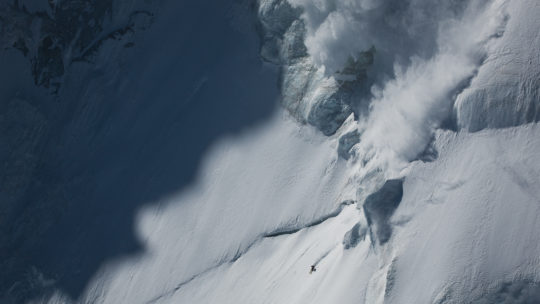