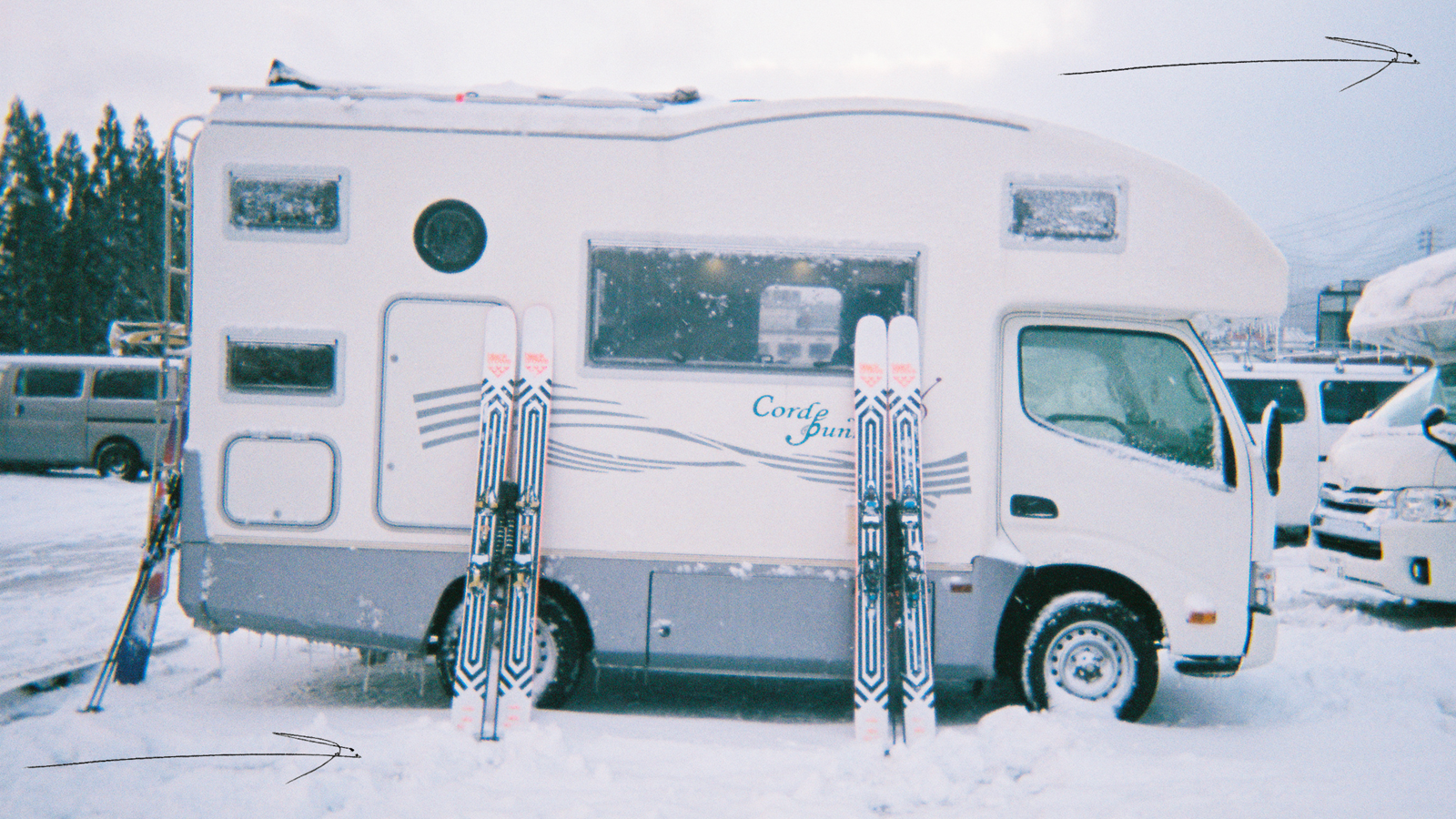 I was hanging out in Southern California last fall, surfing and being a beach bum. Not really thinking about winter, when I came across cheap flights to Japan on a sketchy website. I called up my buddy, Con, from Whistler and easily convinced him to book a flight with me to Tokyo in January.

Flash forward a month and a half, we got another two dudes on board. Callum Pettit and his homie, Alex, who we brought along to document the trip on his Super8 film camera. Alex, myself and Connor were on the same flight, while Cal had left a few hours earlier. We took off from Vancouver in a snowstorm, 12 hours later landed in Tokyo, got our bags and crossed through security. I left my gear with the boys and headed to the car rental desk to sort out our camper van rental. I got a call from Cal, “​Where are you guys?”​ I said, you can’t miss us, we are literally right outside the baggage claim. He said, “​Ya, I’m here. I don’t see you​.” It was then we realized that there are two airports in Tokyo; we were at one and Cal was at the other. And our rental van was at the other airport.

It was late in the evening and I quickly called him back, explaining the situation. We hopped on the train, from Heneda to Narita thinking: Well, at least one of the four of us made it to the right airport…

We hoped that Cal figured out the camper van rental on his own before it closed. Thankfully, when we got to the airport at 11PM, walked out the arrival gate, we heard a honking horn. There he was, driving down the middle of the road, in the smallest camper I’ve ever seen. We all started cheering.

We quickly loaded up and we were off. Driving on the wrong side of the road, errr right side into the unknown. Without a set destination as to where we were sleeping that night, we headed east towards the mountains with the bright lights of Tokyo in the rear view mirror.

We pulled into Hakuba the next morning, a bit groggy from lack of sleep, and found ourselves a small coffee shop, had breakfast and sorted out a plan for the day. The sun was shining so it only made sense to head into the alpine, to the mountain range coined the Japanese Alps. There, we took three chairlifts up to around 2000 meters, threw on our skins and started walking up the ridgeline skin track. With 360-degree views of dramatic spine walls, these mountains were living up to their name.

We reached our high point, taking in the beauty of this place, and traversed over to the top of our lines looking down on a perfect playground of multiple spines and ramps, lit from the late morning sun. We each bag a line, while Alex shot from across the ridge. A pristine face, featuring terrain that’s reminiscent of Alaska. The snow was running fast, light and stable.

Multiple hoots, hollers and high fives were had at the bottom. An unusual first lap in Japan, as most years the alpine is fully locked down by continuous snowfall and next to zero sunshine. Excitement built in the crew as we realized this is day one of a two-and-a-half week trip. With loose plans and only a few destinations in mind, we were in for something special.

We spent the next few days cruising around Hakuba, checking out a few of the different resorts around the valley. Without much prior research on parking the RV, I was pleasantly surprised at how easy it was to find free overnight camping. We rotated between overflow ski hill lots or onsens, Japanese-style bath houses. We didn’t have a shower or bathroom on board, so we hit the onsens every other day after riding, adopting the Japanese culture of the after ski soak. Such a pleasant and refreshing way to finish a long day on the hill. They really seem to have life figured out over there…

With a promising forecast for the next couple days, we woke the next morning to fresh snow on the RV. We headed to the gondola early, reached the top and started ski touring into the sub-alpine forest. The snow continued to fall and we somewhat blindly set our skin track through the trees. We reached the ridge an hour later to some clearing overhead and dropped in…

After a few laps of deep turns and peaceful strides through the forest, we eyed up a run dropping in the opposite side of the valley. A rolling line of sparse trees and pillows that ran down a seemingly never ending valley. We assessed the line from the opposing ridge and realized that it would eventually spit you out at the bottom of the resort.

We figured we had enough footage earlier in the day and wanted to enjoy the lap, sans camera. We dropped in one at a time and re-grouped next to a clump of alders. We deemed the slope safe to ski and all drop in together. The conditions were perfect, deep and stable and we were happy with our decision to ride the somewhat unknown face. The snow eventually turned to crust as we neared the bottom of the tight canyon. Now, we had to navigate our way through a forest of alders and creek crossings. After seven or eight different crossings—we lost count—and a couple questionable moments of being lost we finally saw the base of the resort in the distance. We traversed the final stretch and got back to the RV a few minutes before dark. We quickly grabbed some beers from the fridge and said “Cheers!” to an adventure that we wouldn’t soon forget.

After five days in the valley, we were itching to hit the open road. We got some BETA from our local friend, Tatsuya, to head west towards Myoko. With little snow in the forecast and a heat wave on the horizon we figured it was our best bet to continue our quest of good times and powder snow. We mapped out a route that took us along the coast before cutting back East to eventually gain some elevation and land in Myoko.

The west coast of Japan in the winter is a ghost town. The highway wraps closely to the water, with sandy beaches and jetties with giant triangle cement blocks. A balanced mix of an industrial feel with natural beauty. We pulled over at our first sight of the ocean. With a little bump of swell in the water, our minds seemed to switch for a moment thinking about the possibility of going for a surf. Nightfall came quickly and we continued down the highway. We stopped at a roadside seafood diner, sat down to realize the language barrier was very present in this area. We pointed to a few things on the menu, smiled and hoped that we didn’t order fish semen.

We arrived in Myoko to spring like heat and sunshine. It had snowed a few inches the night before, so we hurried to a small ski hill/village called Nozawa Onsen. Home to the single-man chairlift that is possibly the oldest lift in Japan. After being stuck in an RV for two weeks with four dudes, it was a pleasant experience to ride up a chairlift alone. We blasted a few laps under the chair, some fun rolling terrain. Lots of side hits and transitions that resembled a skate park. Plenty of local talent lined up to session the hit run, we followed suit for a couple hours before packing it in.

The temps rose to well above zero, and we felt our snow shred had come to a close. With a handful of days left on our trip, we decide to head to the coast. We tracked down a couple longboards from a local surf shop in Chiba. Seemed very fitting to cap off the trip with some shared waves, trimming and continuing our flowy loose state that we had become accustomed to. We headed to the beach, a light off shore breeze welcomed us as we quickly ran to the sand to check the waves. Perfect knee high peelers with a few local loggers out in the water. We suited up quickly and once again sprinted to the water. A bit of a surreal moment, surfing in Japan. Didn’t really expect to do this and probably wouldn’t have if the snow conditions kept providing. But, seriously, no complainants here. We traded off glassy waves with the friendly and welcoming locals. What a perfect ending to the trip. 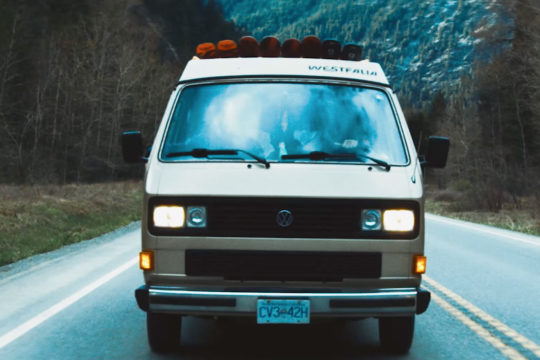