Valle Nevado by the numbers

The adventure at Chile’s Valle Nevado begins well before you hit the resort—58 switchbacks along the road from Santiago, and an 8,200-foot elevation gain along the 28-mile route, make for one heck of a ride. Your reward for the rugged approach? You’re in the middle of the freakin’ Andes, with more than 2,200 lift-served acres of bowls, chutes, gullies and steeps accessed from the doorstep of your hotel. Bonus: If you get the interconnect lift ticket you’re granted access to adjacent El Colorado and La Parva resorts—together the trio is know as the Three Valleys—and that acreage triples.

That landscape is no small thing. Like most of the Alps and parts of Alaska, all of Valle Nevado’s terrain is above treeline. Picture a giant bowl of whipped cream, with stiffened peaks rising up around it. But it’s the sheer relief of the topography that boggles minds—17,000-foot peaks separated by valleys that plunge some 9,000 feet below. This is no “Disney-fied” resort. With only a compact, no-frills base area—yet one that adequately covers your off-slope needs—the mountain can feel as wild as the condors that circle high overhead.

And, lucky for you, the top-of-the-world views don’t get obscured very regularly. “Valle Nevado is always sunny,” says longtime local Claudio Iglesias. That doesn’t mean the resort lacks for snow; it gets an average of 275 inches annually and the name itself translates to “snowy valley.” But, explains Iglesias, “storm cycles are short, and usually we enjoy a lot of bluebird days.” Moreover, a lack of crowds means that powder stashes can last for days after a storm, especially in-bounds but also off-piste. Plus, the high elevation—9,839 feet at the base, 12,041 at the summit—and southern aspect (equivalent to our north-facing slopes) makes for cold, dry, mouth-watering snow.

Iglesias, 45 and a native of Punta Arenas, has been employed at the ski area for close to 20 years, starting as a ski instructor and a coach for the local race team. Since 2005, after earning his mountain guide certification, he’s worked for Heli-Ski Valle Nevado, which operates out of a shoebox-sized office at the base of the slopes. For years, he chased winter between the northern and southern hemispheres, but always returned here. Between meeting skiers from around the world through his heli-ski work and spending time with good friends and family—his wife is a ski instructor and their four-year-old son is already tearing up the ski area— Iglesias considers his home base “perfect.”

Part of the perfection comes from the area’s variety of terrain, both in and out of bounds. If it’s not a powder day, Valle Nevado serves up satisfyingly long, wide-open shots off the Andes Express chair where you can dig in your edges and ride at mach speed; there’s a reason, after all, why the U.S., German, and Italian ski teams, among others, come here for pre-season training. For a satisfying bit of quad burn, hit up Sol 1, which Iglesias describes as a “very long, super G-type run that usually has great snow” or lap the Escondida lift for some fast warm-up runs.

After a storm, head straight for the steeps off the Valle del Inca and Tres Puntas pomas in the resort’s highest reaches. “Not as many people go there, so you have all day to enjoy fresh tracks,” says Iglesias.

For guaranteed freshies, the backcountry around Valle Nevado is easily accessible, and you’ll likely see tracks on the tempting pitches above Tres Puntas and the Ancla poma. Skinning up and skiing Cerro La Parva is a relatively close option, says Iglesias, “but the place I like the most is to ski down 3,000 vertical feet to El Cepo and skin back up to the hotels. Nobody goes there.” For that very reason, he recommends hiring a guide.

If you can swing it, book a flight with the resort’s heli ski operation, considered one of South America’s best, which offers skiing by the run (with a minimum of two) in the jaw-dropping backcountry surrounding the resort. Even if it hasn’t snowed recently, you can find conditions ranging from mid-winter pow to spring corn, sometimes all in the same 4,000-foot-vertical run. Capable guides and an efficient operation—there’s no waiting around for 40 minutes while a heli shuttles multiple groups to far-flung locations—mean you’ll have a seamless experience, whether you’re a heli virgin or a regular.

While there’s a universality to the pure joy of sliding on snow, a trip to Valle Nevado has its own special character. Après ski and well into the night, it’s hard to forget you’re in South America, where late dinners, pisco sours, and the thump-a-thump of reggaeton at the disco in the Tres Puntas hotel are part of the nightly ritual. The party might even start before you click out of your bindings for the afternoon. “If I’m on the slopes at the end of the day, before heading down I like to go with friends to [on-mountain restaurant] Bajo Zero for a pisco sour,” shares Iglesias. “Ask Mercelo to make it seco, and you’ll understand why it’s good to stay there until the last minute. Remember that one pisco sour is not enough, but two is too much. After that, just follow the beginner slope to the double chair [back up to the hotels].”

Despite the tempting après, it’s easy to keep the focus on skiing here. Valle Nevado offers just enough options to keep you fed and entertained without distractions. The base has six restaurants ranging from upscale French to traditional Chilean. The huge outdoor hot tub on the plaza between Hotel Valle Nevado and Puerta del Sol is a frothing stew of celebratory Brazilians (of all genders) on any given afternoon, with pumping club tunes and poolside cocktail service. Catch the sunset from there, or the nearby Bar Lounge. If the disco’s not your thing, duck into La Leñera, a South American sports bar, where you can order an Austral beer, chat up the ex-pat ski instructors, and watch soccer matches amid chants of “Chi-, Chi-, Chi-le!” when the home team scores a goal.

Wherever you are at Valle Nevado—whether it’s looking out over the ski area’s broad flanks from the top of the Ballicas lift or watching alpenglow flood the striated peaks outside your hotel room window—it’s hard to ignore the area’s sheer grandeur, which isn’t lost on even a long-timer like Iglesias. “One of the places I love to go,” he says, “is Vals. It’s just an intermediate run, but it’s surrounded by a magnificent landscape. You are more into the Andes than in any other place that is just a couple of lifts from the hotels. It’s a place to enjoy the solitude and grandiosity.” 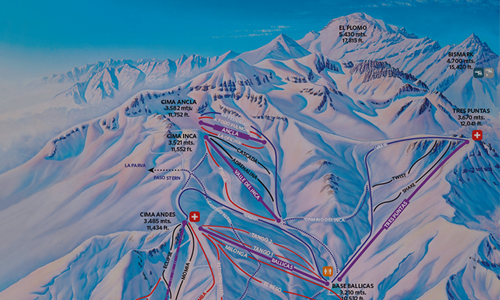 Get details to the best on-mountain spots at Valle Nevado