Over the weekend, rumors began to spread regarding Simon Dumont's involvement in some sort of mysterious, unprecedented photoshoot at Squaw Valley. On Monday, speculation was laid to rest when a set of images began to circulate around the Web. Ski fanatics and action-sport enthusiasts alike feasted their eyes on a halfpipe setup the likes of which had never been seen, much less conceived of; not even in the wildest of day dreams.

Only one man was bold enough to dream so big. The idea came to him nearly six years ago. And finally, thanks to meticulous planning, a great deal of collaboration, a season of heavy snowfall, and a stroke of luck, Dumont's vision came to life.

Speaking with Simon earlier this week, he remarked, "So much went into it, and so much came together perfectly at the last second. Even if somebody wanted to do it, I don't think this could be done again."

The "cubed pipe," as it has come to be known, was constructed by Snowpark Technologies with support from Red Bull; the creation has captured the attention of people all around the world. Many have found it difficult to imagine how exactly Dumont could have skied on such a feature, and today you must wonder no more.

Red Bull has just released the first video showcasing the action. Masterfully shot and crafted, this piece gives you a behind the scenes look at exactly how the shoot went down.

This is unquestionably one of the most incredible happenings in the history of freeskiing, so grab yourself a bag of popcorn, crack open a cold bevy and enjoy.

We'll tell you now, (and we hope we're not spoiling any surprises) Dumont not only navigates his way down this difficult pipe, he executes a flawless and technical run; it's the über-impressive type of run one would see at the most prestigious pipe events.

To see the complete run in addition to more exciting footage, check out Poorboyz Productions' fall release, "The Grand Bizzare." Also, don't miss the kick-ass feature we'll be running in the next print cycle of FREESKIER Magazine.

Earlier this week, ski enthusiast/emerging social media star Brian Schroy conducted an interview with Simon for the Empire blog; here's what Simon had to say about the tremendous feat:

BS: What was your first impression when you saw your custom superpipe?

SD: It was a total mind trip. When I first saw it I thought it was fake.

BS: Were you nervous?

SD: I haven’t been that scared since the quarter-pipe world record. I woke up at 5 a.m. just thinking about the shoot. It is very rare for me to be scared of things, but this really got to me.

BS: What was the hardest part about skiing the channeled superpipe?

SD: Usually when I compete or do a shoot I get several practice runs. Once they took away sections of the walls, there was no way to warm up. I had to fully commit. Usually on my first practice run, I go about 8 feet out of the pipe. I realized that my first hit for this shoot was going to have to be between 15 and 18 feet in the air.

BS: Do you think this shoot will have an impact on the ski community?

SD: I sure hope so. This project has been in my mind for about six years. In the past, we did not have the budget or a way to make the idea into a reality. It was beyond my wildest dreams standing at the top of the pipe seeing everything unfold. Just the presentation in itself was mind-blowing. Between Poor Boyz Productions and Red Bull, we had the best cameras in the world. I can only image how the footage is going to turn out. If the footage is as good as I hope it is, then this shoot could have a huge impact on what is possible in skiing.

To learn more about how this shoot came to fruition, we checked in with Frank Wells, Project Manager at Snowpark Technologies; Wells explains the steps that were taken to construct this unique feature.

FS: Can you explain the steps that are taken when undergoing a massive build like this? Is there any added pressure building something that's never been done before?

FW: The first step in this build was revamping the pipe to a contest worthy pipe. Then Simon came in and rode the pipe for a day. While Simon was riding, we were all on the decks marking where he was taking off and landing on each hit. After Simon sessioned for a few hours, we walked each of the decks with him to make sure he was comfortable with the size and locations of all the gaps and channels.

The next step is where we had to mark and cut all of the gaps. To do this Arron Dietling, a member of the SPT crew, brought out a self leveling fan line laser to mark each cut. We had to make all the cuts at night so the lasers were visible. After chainsawing the cuts we pushed out the snow with cats and finished each wall by hand with shovels. When we had the gaps all removed, we reestablished the floor and gave each cube a recut.

I think we felt pressure on this project but not really any more than usual because we have been talking with Simon about doing this for 3 years.

FS: What's was it like for the SPT crew to watch as Simon stomped a run on the finished product?

FW: Watching Simon stomp a full run through the pipe was amazing. Simon is the man, what you don't think about is that there is no way to warm up on this feature, you have to go for it right away.

FS: SPT is responsible for building some incredible parks and features, where does this rank on your list of accomplishments?

FW: This project ranks right up there at the top of the list for SPT. The coolest part for us as a company is that given the timing of this project, we were able to bring in the entire A team for this shoot. During the year we are all scattered around the planet doing different events and tours, so to all be working together on such a cool project made it a lot of fun for us. 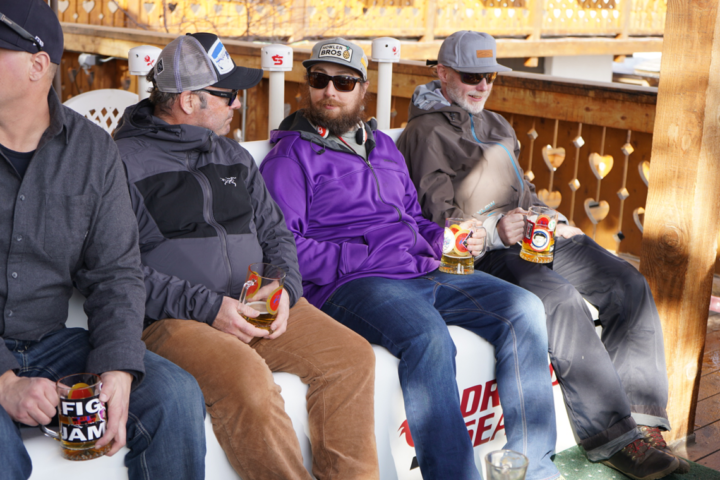