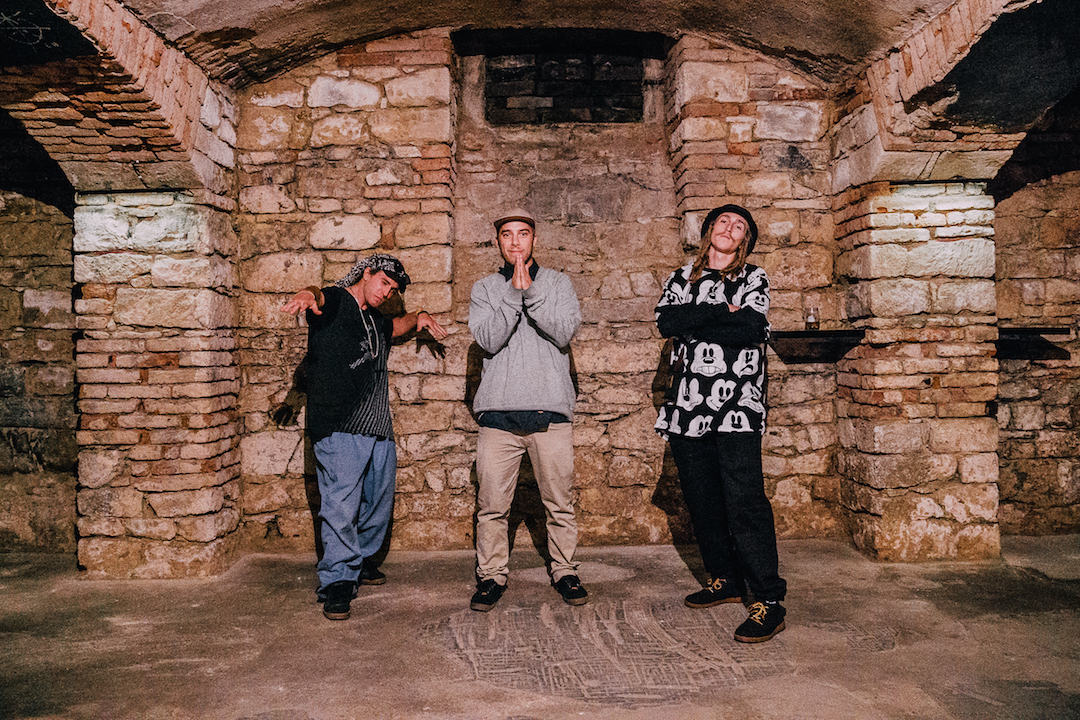 Not all skiers are created the same. Exhibit A: Brady Perron. 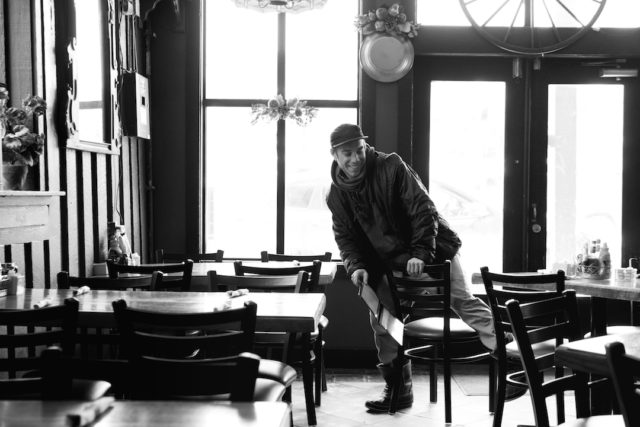 Perron in the flesh.

The New Hampshire native made a name for himself years ago—particularly among avid freestyle skiers—for his personality and on-snow style, both of which were incredibly laid-back. And, although he wasn’t the type to boast about his skiing prowess, he was damn good and a handful of dare-I-say-legendary videos reflect that.

Perron naturally spent ample time behind the lens, too, filming his friends and capturing a variety of experiences as creatively as he could. And, over time, his priorities shifted big-time; he loved filming skiing as much as he loved skiing itself, and that love soon developed into passion for photography, as well.

Today, Perron is making a living behind the lens—currently based out of Salt Lake City, while traveling all over the globe and making a name for himself all over again, in a whole new way. From helping create Henrik Harlaut and Phil Casabon’s latest masterpiece BE Inspired to commercial work with clients like Spy and designer Elaine Hersby to shooting with esteemed crews such as Stept and Good Company, the man’s on a mission, and a successful one at that.

I recently chatted with Perron in between his long list of pursuits to talk about the past, present and future, as well as his current sources of inspiration. Here’s what he had to say.

All photos by Brady Perron

For our readers who aren’t familiar with you or your work, how would you like to introduce yourself?

Alright. I’m Brady Perron. I used to try to ski in front of a camera for a living but have always found a similar and equal release behind the lens. Now I’m running with that, freelance editing and shooting video and photo. It feels natural to be involved with visual art projects. 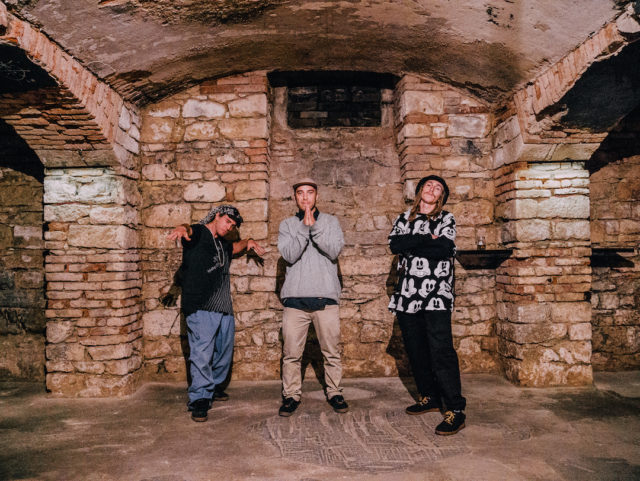 From left to right: Henrik Harlaut, Brady Perron and Phil Casabon in Prague.

Seems like, years ago, you kind of vanished from the ski scene, then started reemerging. But you weren’t in front of the lens, you were behind it. Can you talk a bit about how that transition happened?

I didn’t have a lot going on with my skiing when Phil [Casabon] and Henrik [Harlaut] fortunately reached out about being their full-time filmer for their upcoming two-year project, which would eventually be called BE Inspired. I think they assumed my enthusiasm for the lifestyle, as well as video and photography, would lend itself to the project. I’d like to think that enthusiasm and our friendships were both reflected in the film.

The trailer for BE Inspired.

Your enthusiasm for video/photography certainly showed in BE Inspired. Can you talk a little about the ups and downs of working on that project? What was fun about it, and what was just plain difficult?

We felt very fortunate being together working on our crafts, and we frequently shared that thought. “We” includes Emil “Stoudgen” Granoo, as well—one of Henrik’s long-time friends from Sweden who also filmed and lived for the movie. Shouts to my man, Stoudgen!

We searched for a rhythm when filming for the movie, and I think we found it best in Mammoth and Quebec. There’d be weeks in a row where we wouldn’t miss an opportunity, stacking clips and recharging every night by seeing each other’s edits. There’d also be bad weather and injuries to balance. Through it all, we didn’t get too temperamental with one another, and tried to be mindful about our mission and living situations. We mostly amped each other up, acknowledging how fortunate we have it. “These are the days,” was an often-said phrase. 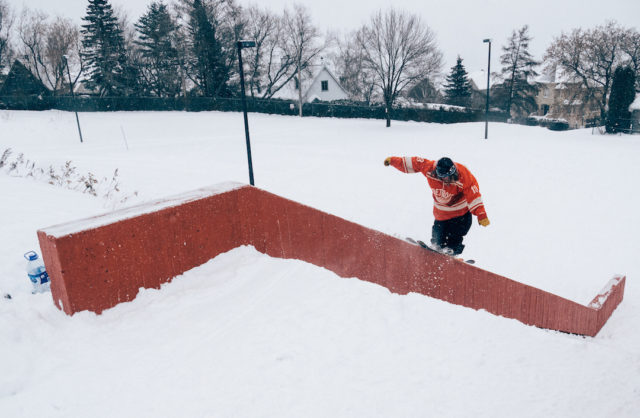 Henrik Harlaut at the classic red ledge in Quebec. 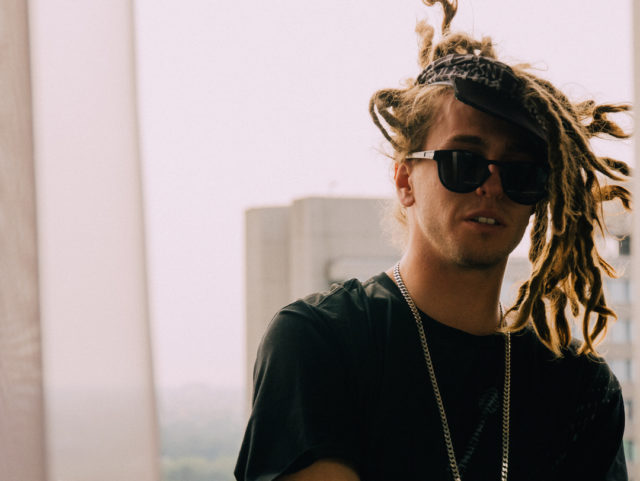 Harlaut kickin’ back in Munich.

We’ve seen that you’re filming skiing, but it seems like you’re also up to some other stuff these days… Mainly based off your Instagram feed, which doesn’t include a whole lot of skiing. What the heck are you up to these days?

Thanks for scrolling my feed. I love working on snow stuff, but also elsewhere. I’ve been spending and sending a lot, man. Ha!

I’m finishing up a portfolio site and reel at b-person.com that might give folks a better glimpse. But, basically, I am trying to fill my days up with good experiences while contributing to projects I have interest in. Also, I’ve been trying to surround myself with fun-loving and smart people.

I’ve been bopping around Europe and the East Coast a lot, trying new flavors and revisiting my home area [Sunapee, New Hampshire] as an adult. I have also been helping supply content for my brother’s brand, Treefort Lifestyles, while lending a hand to super-teams like Stept and Good Company. I gravitate towards skate, fashion, music and travel pieces, and have been working with brands like Spy and designer Elaine Hersby. 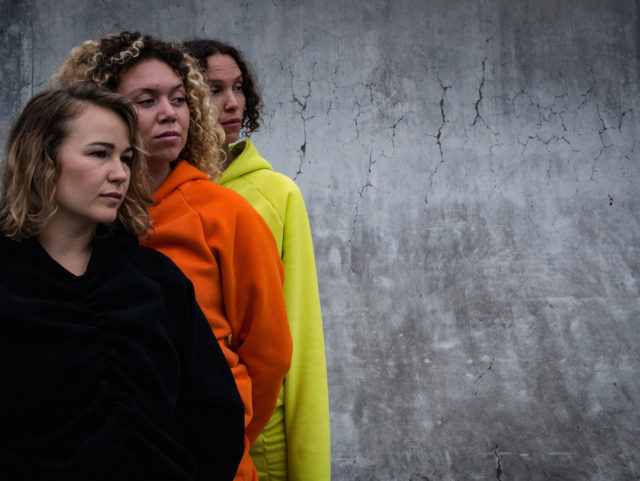 Shooting for Elaine Hersby in Copenhagen. 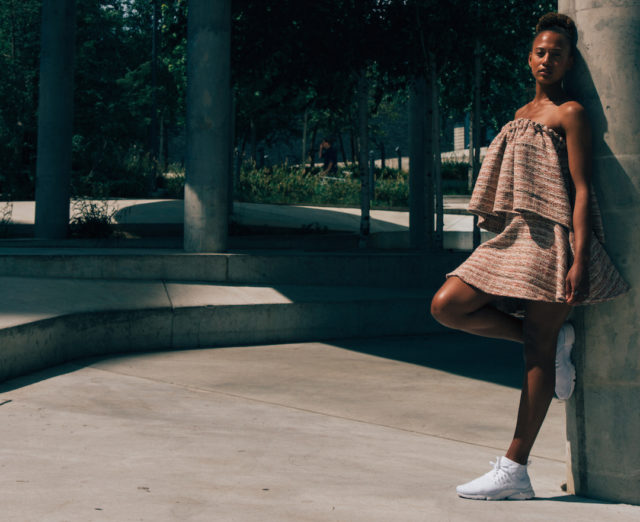 Another photo from the Elaine Hersby shoot in Copenhagen. 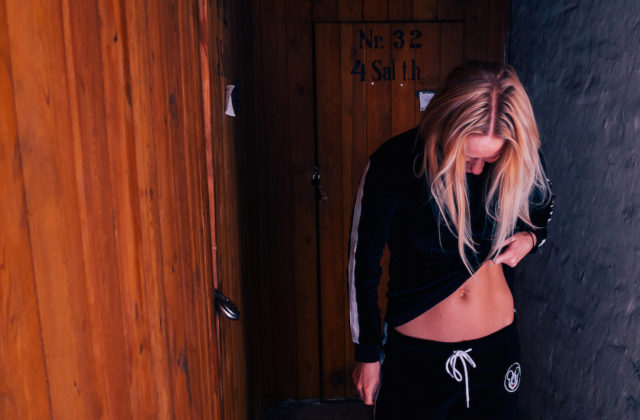 Lifestyle shooting in a Danish attic.

What kind of work have you been doing for Treefort? Photo and video? How’s the brand doing as a whole?

I’ve been shooting video and photos for them; it feels so damn good to contribute to my brother’s brand. Co-owner Jeff Curry and I are also close, and share great understanding and motivation. We all bounce ideas around, brainstorming and encouraging one another to continue the momentum.

They are doing great, living in the rainforest between Portland and Mt. Hood, Oregon, and are happier than most of my friends. They support what I’m trying to do, as well. The brand is continuing to be U.S. made, grow organically without any big investors, and even has a new office in Welches, Oregon. 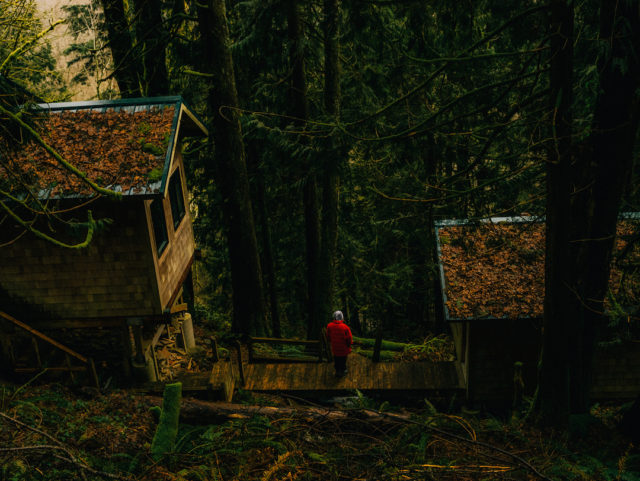 Shooting for Treefort Lifestyles in Oregon.

What do you have to say about shifting out of the ski scene and working in other spheres? It’s always interesting to hear from folks who manage to do something besides skiing after being so involved with the scene.

Like many athletes, I pulled from beyond skiing to motivate my direction on snow. The same goes for being full-time behind the camera. It’s inevitable that I extend towards, and feed off some of the other cultures I’ve always been part of. Collecting perspectives, recognizing interests and connecting those into your work is how anyone can stand apart. I’m trying to pull from everything I’m into, which is pretty eclectic. I have been subtly shooting and editing video and photos for the past 10 years, and now I’m attempting to make it more than a hobby with these interests in mind. Understanding some of what it takes to produce decent snow content has only pushed me to use those elements within other realms like the music, skating and fashion. 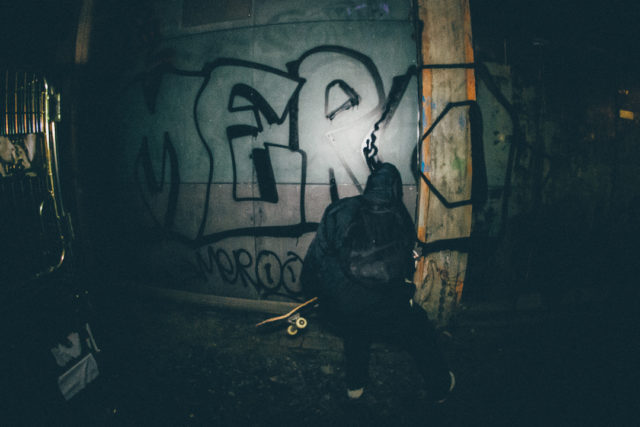 On assignment, filming a skateboarding edit in Sweden. 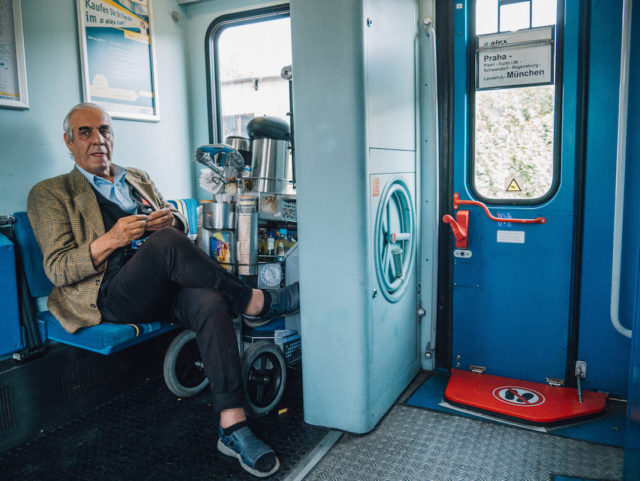 A stranger on a train in Germany. 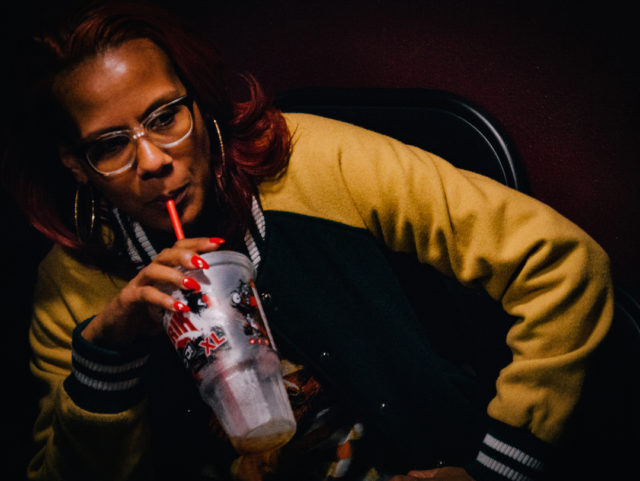 Do you see yourself filming/photographing for a living for the long haul or is there another plan brewing?

It is a great fit for me. I definitely won’t ever stop shooting and editing video or photo. I’d like to learn more and eventually contribute to bigger projects as well as more impactful causes, innovative pieces, experimental looks and leading brands.

Can you elaborate on that? What kind of work exactly are you aiming for?

I’d like to boost an outreach program, contribute to a makerspace, maybe something regarding repurposing and probably create awareness about a touchy issue or event. Regarding that last idea, I’d like to be part of a controversial or provocative music video that can’t fall through the cracks. That’s definitely a goal: make something that is a sign of the times. 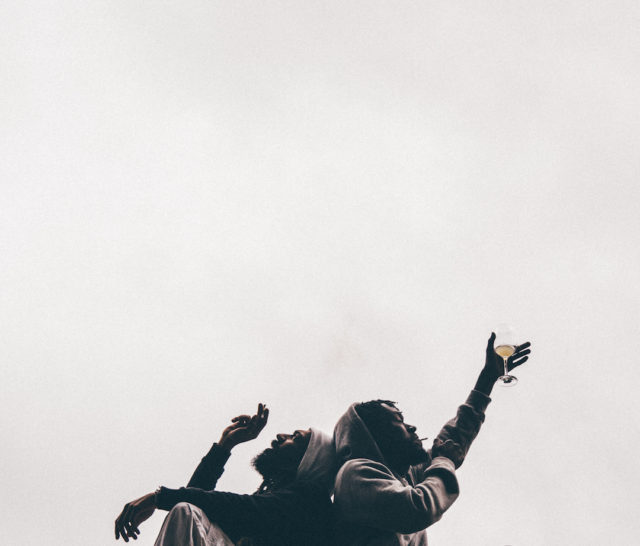 Looking at the bigger picture, do you have plans to create a team like Stept or Good Company? Or do you want to go down a different path?

For now, I hope to continue learning and feeding off folks while paving my way elsewhere. It’s always more tangible and motivating if someone you know can ramp up your game. They have always been supportive and want me to grow. It would be great incubate a project to pass along to them, too.

Mostly, I want to find my signature look and focus on bringing that to each project whether it is music-based, apparel, travel, etc. I really like working in the handheld sphere.

What photographers and videographers do you look up to and why?

Corey Stanton is one of my go-to’s. He is so well-rounded, intrigued and dialed in with his ambitions, gear and love for the camera. He charges me up to find my signature look. He can do it all while having a good time, too.

AJ Dakoulas has always had quite the natural eye, tech knowledge and editing skills. I’m always trying to feed off him. Kyle Decker, too; they work together well and I like seeing the camaraderie.

Cole Barash has always made a big impression on me. His work is gold and he seems to have a good time with it. He is from a similar small town area and has touched folks globally with his range of imagery. He’s boss.

Taylor McIntosh’s Instagram is bonkers—a must follow. He was always a cool dude to run into when I was a kid in the New England ski scene. He’s been in New York for years working on films and commercials, I believe, and capturing super compelling images on the side.

Nick Martini has always been a motivator and role model for me. He is beyond the man. He’s been leading the charge with his crew for so many years, directing and shooting next-level pieces. Big ups! Crazy seeing him develop into his role while still being young and good-hearted.

I also look up to Cam Riley and get to work with him here and there. He is a straight wizard behind the lens with an awesome scope and attitude. Be sure to go peep anything he’s done on skis, too.

Nabil Elderkin: look him up. He probably directed your favorite music video, or your new favorite.

I just reconnected with Charlie Owens the past few years through Henrik. I met him when he was 14 or so through his older sister in Salt Lake City. He’s got quite the mind and continues doing cool shit. He has great potential; can’t wait to see what he grows into while in NYC. Shouts to Will Desena, too; dude is next level.

Anything else you want to say?

Hell yeah. I’m working on a photo book with Swiss design ninja Kilian Amendola. It should be really cool since he is involved. It will hold my journal entries and images from the making of BE Inspired—very travel- and behind-the-scenes-oriented. I’m eager to release it this fall and hope people can take a cellphone breather to enjoy and share.

Learn more about Perron and see more of his work at b-person.com.