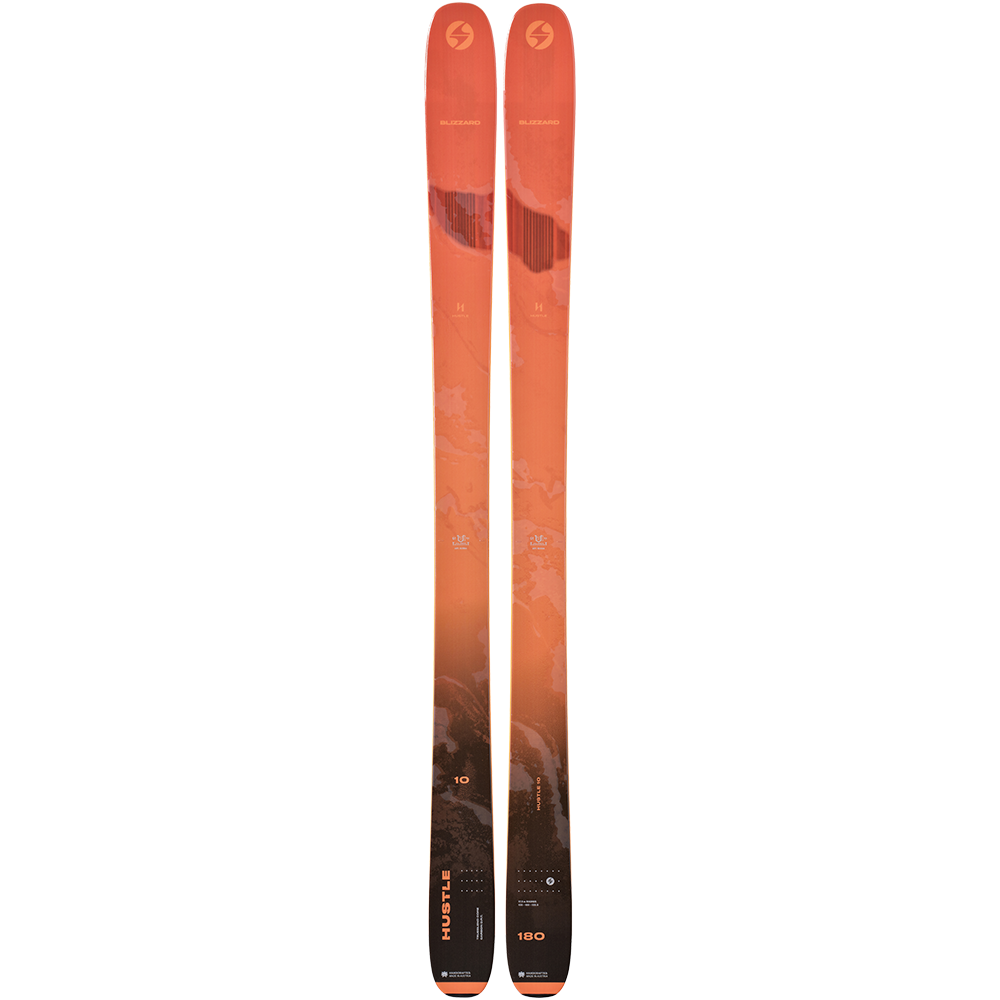 BLIZZARD’S HIGH-PERFORMANCE SKIS REALLY SING TO SPECIFIC SEGMENTS OF SKIERS. You have big-mountain freeride staples like the Rustler and Sheeva that can conquer just about anything a resort can throw at them. There is the lightweight Zero G for the backcountry purists intent on earning their turns. But what about a line for the ski town dark horses? The pocket-bacon-munching, bell-to-bell charging, ski-it-all rippers? Enter the brand new Hustle lineup, and more specifically, the Blizzard Hustle 10—a 102-mm tool to specifically engineered to ski backcountry and resort destinations across North America.

“For the Hustle 10, It was really just the right time for us to find that happy space between two success stories—the Zero G and the Rustler/Sheeva,” Blizzard’s Director of Marketing Frank Shine said. “We’re reaching out to a new group of people that want to get out there early with their headlamp, because that’s the only time they can go skiing. This ski is also for someone who might only have an hour to jump on the tram and go off the backside at Jackson, but they’re going to ensure that they make it happen.”

The Blizzard Hustle 10 shares the same mold as the Rustler 10 but what lays inside the ski is where their stories diverge: Rather than using Titanal for the D.R.T. Frame like in the Rustler 10, Blizzard’s engineers opted for a bidirectional carbon fiber and fiberglass mixture inside the Hustle 10. The TrueBlend Free wood core also adds lightweight paulownia to the mix of beech and poplar, further lightening the ski.

“By adding paulownia to the beech and poplar [mixture of wood in the core] in the Hustle 10, you get this really complicated core that reminds you of a Rustler, but it’s lighter; it’s easy to move around and it’s just easier to travel with in general,” Shine said. “For some people, it might be a ski that’s a little bit more attainable. But ultimately, it’s an adventure ski, and adding the paulownia to the TrueBlend core is what got us there.”

The Hustle 10 is a unisex ski that will be best served with a crossover or low-profile tech binding mounted to it, a setup that aligns well with Blizzard’s dark horse target market.

“I remember bringing the Hustle 10 into my local ski shop last year and all my buddies just dropping everything so they could check it out and handle it,” Shine said. “When you have something that can turn 30- and 40-something-year-olds into kids on Christmas morning, you have something special. That’s what this ski is all about.”